I enjoyed this a lot more than I expected. It's an hour and a half of live tango music, with a singer, eight dancers, some pretty costumes and a simple set. It doesn't insult your intelligence with anything like a story or plot, and the second half is a bit like watching ice dance championships in a warm room with better music and no commentary or waiting around for points.

It started very well with a funny scene of a domino effect from a flying heel that any London dancer could instantly relate to (I half-wish that what happened, would really happen here, but I don't think there's room). And the first half reminded me that tango, like other forms of dance, really can express other things besides itself, like character, story, and so on. I'm not saying it always succeeded in doing that, but it certainly could and did sometimes. In the second half, the clock-hand legs, ice-dancing throws, and feet flickering on every note pleased the audience in general even if they soon lost my attention. Although I actually kind of liked the headbanging Britney Spears in half (the right-hand half, I think, I could be wrong) of a purple shellsuit, all very fragmented and Postmodern to Piazzolla's Zum. There was also Gallo Ciego, which somehow brought to mind the scene in So Long, and Thanks For All The Fish where they fly upwards out of her flat and astonish a lady in an aeroplane. I'm not sure why that in particular rather than some other random sex scene. But somehow.

By this point, I had noticed that on the platform at the back of the stage were four guys playing great music, so I mostly just watched them. I couldn't see the pianist, but a bandoneón is fascinating to watch being played because of the peculiar way it has to breathe. I'm curious to see inside one. I also learned how some of the puzzling noises that turn up on tango recordings are made; apparently with a double bass, the bow, and a process I can only describe as slap-and-tickle. For some of the second half all the dancers went off and let the musicians do Piazzolla all by themselves; according to my programme the instrumental pieces were Otono Porteno, Fuga y Misterio, and Adiós Nonino. They were called Quatrotango. There was also a singer, Pablo Lago, who was sometimes on stage with the dancers and sometimes just with the band.

As for the dancers, I'm very happy to say that all the women in the cast had, as far as I could tell, eschewed The Plastic; and I think whoever chose them should get a round of applause just for that. Yanina Fajar, who was also the choreographer, is extremely watchable and held my eye all the time when she was on stage. As for the men, they were nice to watch, they reminded me of several people who were exactly the people you'd expect (minus twenty-five years in some cases) and they must have done a good job because generally speaking you mostly saw the women, which is how it should be if it's going to be recognisably tango.

Peacock Theatre, until 11th April. I bought my ticket at 7pm on the day, all prices were available. 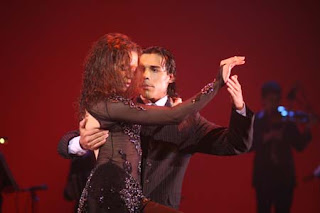 [Edit - jazzed it up with some publicity stills from the website.]

Labels: argentine tango, other dance or dance in general, outings

I am glad you enjoyed it as when I first saw it last year, the only good thing about it was Javier Di Ciraco, the lead singer, who is the singer in Sexteto Milonguero (at Negracha in June)The dancing was manic, mostly to milongas. I was exhausted by the interval. Oh the band was good too,
I heard from CE that is is much better this year. I have had enough of Tango shows as I never think they show the 'real' Tango.

The only thing I felt the show is missing is a real tango. The showy stuff was very good and technical etc and entertained me for most of the night. But I just wanted to see one real tango where the couple is enjoying the music, embrace and not trying to adorn every beat in the music.

For those who plan a little in advance, lastminute.co.uk still have tickets left. I've never left it to the last minute and bought tickets on the night - are they discounted?

It was a Tuesday night. The tickets were not discounted, but the place was nowhere near full; my seat was £15. I don't see any reason to bother paying the online booking fee for a weekday.

I felt they were thinking about including the real thing but they only actually tried to do it in the encore. And I tried to imagine how you would make anything approaching the real thing please an audience who don't already know what they're seeing. Imagine - how exactly would it go and what exactly would it look like? I think you'd have to be GOOD, not just a professional-level dancer/choreographer but seriously good and determined out of sheer bloody-mindedness to do something people probaly won't like or understand unless you use the show to teach them. So I wasn't expecting that. I was expecting lots of sparkly twiddles, which is what I got, plus an unexpectedly good concert. The consensus from others I've spoken to does seem to be that the dancing is better than last year.

It's the same in flamenco. The shows put on a manic craze of synchronized group dancing.

Yet a significant proportion of the audience who go time after time want to see the real thing.

And they only get it at the end, as an encore. Which the fans love, and actually the performers also love as it is much more improvised, personal and genuine.

So its an in-joke amongst flamenco fans that we go to shows just for the encores!

I wonder if tango shows might put on encores with real tango?