I knew I wanted one, because I'd heard them in action. Two of them chained from a laptop are plenty to fill a good-sized room and have a perfectly good pop-up milonga with twenty or thirty people or so. Which is a nice thing to think, even if you don't do it. But they come in several charming colours, and I put it off and put it off partly because they are rather expensive, but mainly because (they being so expensive) I wanted them to be perfect and I couldn't decide which colour to get.

Then they brought out these purple ones with the yellow ends, and totally made the sale. 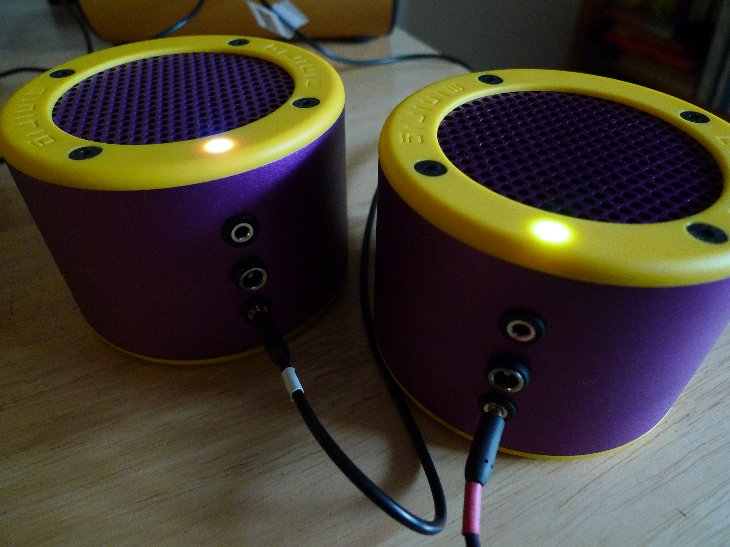 I played with them for a while after buying them, enjoying both the sound and the purple-and-yellowness. They're not cheap. They're a bit lurid. As I smiled at them, one of those flashes of self-knowledge informed me that these have now become the thinking woman's Comme Il Faut.

I've taken one on trips a few times, and used one this Spring (turned down very quiet) for dancing outside Pisa airport. And it was enough. I thought I wouldn't get the use out of them that I should for the price, since dancing in airports doesn't happen as often as it ought, but they're so small and so good that I use them all the time. I have one constantly on the dinner table for listening to lectures and radio programmes from my tablet, and the other in the bedroom. The only annoying thing is the bright battery-status light, which I cover with blu-tack if I am playing a lullaby.

But I am just as much a sucker for a clever, expensive consumer product as anyone, so just recently I bought the gold subwoofer as well. And it sounds GREAT. Of course, it enhances any music where the bass is important - and if you were teaching a muscality class, you'd probably find it very useful. But I also like the way it enhances speaking voices, especially male. 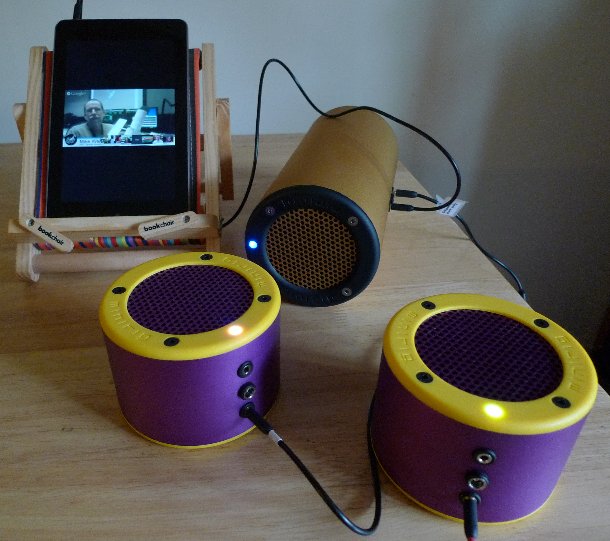 Now it lives on the dinner table too. In the picture I'm listening to a conversation about how the Hubble Space Telescope is steered. As for playing tango music from my computer, I like all sorts of things that I didn't much enjoy listening to at home before.

Anyway, here are Richard's in the form of action most likely to interest my readers - DJing from an iPad at a party. He didn't bring a subwoofer, as it's not needed in such a small room. I really WANT the pokketmixer you can see at the front (which is unpowered and lets you plug in headphones and switch channels to prelisten) but I have absolutely no sensible reason to buy one and they're, like, 90 EUR. So I'm not going to do that. Really. Not yet, anyway. It's so cute and clever, though. Maybe I could get one for Christmas.

The Minirigs are made in England - in Bristol, I think, or at least they are designed and tested there. They all come with their own padded cases and cables, and they sell a special backpack for carrying the whole setup and turning yourself into a walking sound system, but I don't like the design for this situation - I'm visualising an adapted hard-shelled briefcase that would open, maybe slide and click, and sort of fold itself inside-out, and be ready to go. It would need pockets for up to four minirigs, the subwoofer, the pokketmixer, the cables, some headphones, the ipad perhaps - and some reading glasses, in case you forget.

You can chain together as many as you want, which is very efficient if you are having a party and several of your friends own some. Obviously, though, you pay for the portability and style, so if you want a proper sound system for a big room, two big speakers of equivalent quality are going to be much cheaper than six little ones.

No they have not given me anything, but it would be ACE if they did.

Posted by msHedgehog at 21:12 0 comments