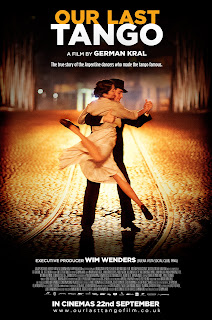 So, I was invited to a screening. I think tango people will be interested in this movie.

It is the story of Maria Nieves and Juan Carlos Copes, who met in 1949 (as far as I can work out) when they were 14 and 17 respectively, and danced together, on and off, for about fifty years.

Copes – as it is presented by both of them – invented tango escenario. In the early 50s, the social dance was already on the way out as a mainstream activity; he dreamed up the escenario idea and he made it happen, to worldwide acclaim. He calls Maria Nieves his Stradivarius. She, at least at the beginning, was in love with him, whatever that means; at any rate it seems that for her, the enterprise was about him. But apparently he missed her enough to restart the relationship after a world tour without her, when she was already with somebody else. To what extent was she the one the people came to see? She doesn’t seem to know. He must know, or at least think he does, but he isn’t saying.

The director has dancers in the same business play the protagonists at different points in their lives, using some unusually inventive, expressive, and short choreographies. The film-maker’s standards and sensibility mean the dancing is remarkably well-used, certainly much better than I’ve ever seen on stage. It serves the story, rather than hold it up, it’s expressive, comprehensible, and clever, with a soundtrack provided by Sexteto Mayor. But then, in the interview sections, it’s the cast themselves who ask the questions, in the context provided by the sets. This central device works beautifully; the effect is sympathetic and also entertaining.

As a whole, it’s beautifully shot, gorgeous to look at, rather touching, and interesting in the way it’s done. I think it offers some insight which a lot of tango people will be interested in – scroll down for spoilers – but a general audience will also enjoy it, so don’t hesitate to take your Mum. Nothing very dreadful happens, it’s just an interesting human story. It’s in Spanish with subtitles, which are mostly okay, with some errors (“no lo siento” does not mean “I don’t feel it” – it means “I’m not sorry”, which is rather different). The translation of the title - "Our last tango" instead of "One more tango" or, maybe, if you want, "One last tango" - is strange.

Eventually she manages to see him, too, as a means to an end, and she talks about having become a better artist; but, happy as she is to have provided for her family - having started cleaning houses at eleven years old - she never seems to claim that end as truly her own. She wanted to have children; that was sacrificed to their work, along with a happy relationship, while he made no such sacrifice. That injustice is the heart of the movie, and it’s very moving.

Nieves does most of the talking; Copes says very little, but I’m impressed they got him to say so much. He escapes self-destruction into what appears to have been a happy and lasting marriage with a sensible woman he still actually likes. For Nieves, it was already too late.

Towards the end we see Copes dancing with his grown up daughter. She says that, of course, she was a “clone” of Nieves at first. Not quite the same thing.

But here’s what I got from it on the subject of tango. If tango escenario was constructed in the Fifties on the basis and by the instrument of this personally toxic, cruelly sexist, unequal and inauthentic relationship – could that possibly explain why it has so very little to say, and has gone nowhere since? If this is still revered by the people who might, otherwise, be creating something newer, more interesting, and more beautiful, is that part of the reason they don’t?

As tango people always do, they talk from time to time about emotion in the dance, about passion and feeling; but with the implicit proviso that it doesn’t actually matter at all what the woman feels. Anger or terror, or nothing at all, will do just as well, in practice, as anything else.

It reminds me of the judge Ruth Bader Ginsburg’s famous observation on gay marriage. When marriage is a property transaction in which the woman is as much a chattel as her goods, the idea of gay marriage is pointless. When it is a voluntary, severable partnership of legal equals, any purpose in limiting it to a man and a woman just disappears.

When a relationship like the one drawn was what everyone saw as normal, the Copes-and-Nieves-style tango escenario had an emotional, social and erotic charge that powered it to worldwide fame. Now, it’s just sleeping with someone you fancy but don’t like, which is generally considered trivial, if a bit immature, plus working with them as well, which is generally considered unprofessional and tiresome. The charge is gone, leaving stage shows that think they are still based on it empty and extremely dull, but unwilling to look beyond the zombie idea to any living possibilities. Except on the very rare occasions when someone imagines sincere emotions that make sense to the audience, and puts them on stage. As happens, in fact, in this film. The heart of which – a human being feeling she’s missed out on a family life and children – is the woman’s own story, which has never got into the shows.

Posted by msHedgehog at 19:53 0 comments