It's very tedious when the lead is pretty much unaware of my response unless something goes badly wrong. If I dance perfectly, we'll both get some aerobic excercise, and I'll otherwise go unnoticed. It sometimes goes with incessant talking.

I don't know why some people bother. They might as well be dancing with a Playstation, pressing buttons with a requisite sequence and speed. And talking at the same time.

Posted by msHedgehog at 23:09 3 comments 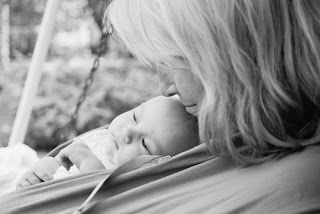 I think this is my favourite of the photographs I took when I went to visit K and the Moominbaby.

Posted by msHedgehog at 19:21 4 comments

Knitting up the sleeve

I've been sitting and knitting in my north-facing window seat, hidden behind the curtains, lit by a low pale silver sky. Outside are purple copper-beech and flame-orange lime trees and the sounds of the street, and children, and crows. This butter-soft angora and the yellow bamboo needles flow around my fingers and fill my attention without demanding anything.

It's a privilege to be able to make a physical thing. My troubles unwind very gently with the ball of wool.

I do like to knit in company with friends. I think my favourite thing to listen to while I knit alone is radio cricket commentary. Sometimes I listen to a podcast, or some music.

Today I just had silence, street noises, and crows.

Posted by msHedgehog at 18:15 0 comments

I think I've become a noticeably better dancer over the last two days. I went dancing on Friday, and I had a couple of rather long sessions dancing with the same men. I usually prefer not to do that, which is why I like DJs who play neat sets of three with interludes between. It increases my chances of dancing with everyone I want to.

But this particular night was a good night to do it. It eliminated other variables and allowed me to remember a few things I'd learned about technique and had in my mind for a while. One after the other I remembered them and worked them in until, for the first time, I felt they were all there and my nervous system understood them. You can think about these things and go to classes all you like, but miles on the clock are so important.

Then on Saturday I went again, kept it together, and found I could do things naturally that I couldn't do before.

I've got a lot out of Paul and Michiko's Canyengue classes. I've never had the opportunity to dance Canyengue socially, but it's done wonders for my tango technique. I'm not quite sure exactly why. I think it's partly to do with not over-twisting, and partly to do with the way you have to learn to lean in and then sometimes pop up again. I think some muscles around my hips have learned to dissociate more, and some muscles in my back have got stronger and better coordinated.

I feel I've got off a plateau and I might be going up again. I don't think I'm going to be able to go dancing at all next weekend, which is a bit of a shame, but I won't forget. There's more energy in my steps now, as well as more control.

Posted by msHedgehog at 17:14 0 comments 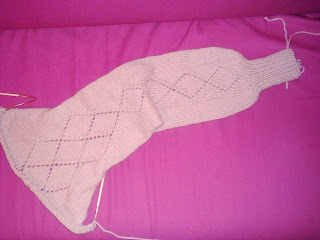 Jo at my Wednesday knitting club gave me five balls of this beautiful light-tan Angora. She said it was lovely to knit with but she couldn't stop sneezing, so she decided to give it away to a good home and go back to socks for a while.
I'm hoping it doesn't make N sneeze. I showed her a picture of an Angora rabbit and she said it was 'candyfloss with a bunny face,' but as far as she knows she's not allergic. I seem to be fine so far. The pattern is something I just made up based on the shape of this one at knitty.com. I think there'll probably be enough. N works too hard and has to be kept warm in winter.

Posted by msHedgehog at 20:13 0 comments 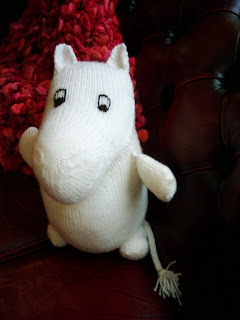 Posted by msHedgehog at 16:10 5 comments

I'd like to apologise to the young man I danced with at Negracha on Friday. I snapped at you when you tried to explain what you wanted me to do, and I was ashamed of myself at once because you were perfectly nice to dance with. I was the woman in the red dress who you think is a horrible bitch now. I dance OK but I'm not that hot and I sometimes forget what a battle-axe my tongue is. And when you didn't understand me, I said it again! I'm very sorry and I understand if you never want to dance with me again.

Posted by msHedgehog at 23:06 0 comments