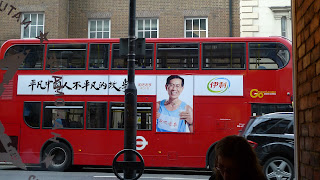 Posted by msHedgehog at 23:17 1 comments

You know when you have your head set for the wrong thing? I was all set for a quiet afternoon at the Letchmore Heath tea dance, a bit of nice dancing, a bit of sitting and catching up, working on some friendships, a little trivial gossip about people I long to talk about with sympathetic people who will talk about them without pointing that out, perhaps a few ill-advised confidences, maybe indulge in some minor histrionics, and then all these really lovely unexpected people turn up and I do nothing but dance and drink tea. It was great, but it wasn't what I had my head set for, and I ended up wanting more of everything, both thrilled and inexplicably disappointed and having a totally confusing afternoon before ending up eating an orange in bed.

Today, for the first time, I saw a London bus advertisement (apparently for drinking milk, or something) written entirely in a language I cannot read at all, let alone translate.

Don't misunderstand me - advertisements in languages other than English without a translation are very common in London and not at all remarkable, but they're usually small in scale, the largest being shop names saying obvious things like "POLISH FOODS" in Polish. As far as I remember, this is the first time I've seen a foreign-language ad on a bus.

Although the shapes of the characters are of course vaguely familiar, the only one that means anything specific to me is the fifth one which I know as "rèn", a human being. Now, there are numerous languages written in Chinese characters, and I have no reliable way of knowing even which one this is, although under the circumstances Modern Standard Mandarin seems the most likely candidate, with Cantonese perhaps second favourite.

I am curious to know if the man in running shirt and glasses is 'just a man,' or someone the target audience would recognise.

I can't use Google Translate for this because I don't know how to write the characters on my computer. Can any of my readers (a) confirm the language, (b) make a pinyin transcription (c) translate the text? [Edit: Answers here]

The location, incidentally, is the corner of New Oxford Street, where the umbrella shop is.

Posted by msHedgehog at 21:06 4 comments

I was privileged to see that performance - it was extremely interesting.

Last Chance to See: Dany and Lucia are at the Crypt tomorrow (today now actually), Negracha (I think) on Monday and a couple of other places for a few more days. The tango-uk list will probably fill you in if you haven't got a flyer.

Here were the things that were in my head afterwards.

1. If you can wear a golden-beige silk suit and two-tone shoes, chew gum, and walk up to a woman exactly like that, and it all really works and you don't look like a fool, you have something very special for which there is absolutely no substitute. Call it presence, or style. Whatever it is, imitation would miss the point.

2. About half way through the second track I had a revelation about someone completely different in a totally unrelated performance; I suddenly understood what he had been trying to do, and why it hadn't really worked in performance terms, because now I could see where it came from and what was needed for it to work. An otherwise baffling memory made complete sense.

3. That same thing - the transforming thing - is very difficult to film when it's there in real life. So I'm glad I saw this live, it was very informative. (I've heard that actors with great screen presence are sometimes the other way round - it just isn't there without the camera).

4. I'm sorry I missed seeing him dancing socially, I think I was too late by a tanda or so.

Posted by msHedgehog at 02:11 2 comments

Another dumbphone picture, sorry it's so small.


We were driving back from a fabulous birthday surprise milonga in Bristol. Not only was there a baby elephant flying in the sky, it was a thundery sky generally, with intermittent rain, and for a long time every vehicle had its own individual rainbow attached to the rear wheels.

For more clouds: The Cloud Appreciation Society, fighting the banality of blue-sky thinking.

Posted by msHedgehog at 19:06 0 comments

I was SO depressed at six o'clock - my work week had just been depressing and I had practically convinced myself that I was a disastrous, shameful failure with no hope of redemption. Minds like mine do that sometimes, especially when exposed to boredom and stupidity together.

And now I've had a great evening, and I was so happy on the Tube home that some woman about fifteen years younger than me, who wasn't even obviously drunk, as she was getting off, said "You look so happy! and I love the flower in your hair. Give me a high five, don't leave me hanging". So I gave her a high five and wished her a very good night.

There was a moment when I wished I had my proper camera. I only had my dumbphone, so we'll have to make do with this tiny little picture.

Beto, who was DJing, saw me spotting this, he laughed and said "When it's a good tanda, this happen!". The glasses belong to two friends, who were busy having a good tanda together, and one other person who I was convinced, a moment later, had picked up the wrong pair - but I was mistaken, it was all right.

Posted by msHedgehog at 01:22 3 comments