The Gormlets get their own blog

The Gormlets have their own blog now. [Edit: updated the URL because they've emigrated to Wordpress].

This blog (the mainly tango one) has been a really big help to me in learning to dance well. Just the process of finding something to say and saying it has been a great way at different times to get out of my comfort zone, explore, and think carefully about what's important.

When I was young I had an obvious talent for drawing, but I had no idea at all what to do with it. It seemed like something I might be able to go back to, one day, in some hard-to-imagine situation, but all it did at the time was get me banned from playing "Squiggle" at school.*

Gormlets.blogspot.co.uk is for drawings, paintings, and any other artwork it occurs to me to make. I'll probably put some knitted things there, too, as well as here. The idea is not to work towards a specific goal, but just to do something, see where I get to, do something else that seems to make sense given the results, and repeat. There are two pages of posts already, so you can go and click around.

That approach has served me extremely well for tango. It's probably going to be harder with the drawings, because I'm not too sure yet how to identify small goals, work on it regularly, or get meaningful feedback. But blogging them will help me to keep track of what I have done, and gives me some chance of developing ideas.

* Squiggle is a game in which you divide the blackboard, and the class, into two halves. Someone draws an identical meaningless squiggle on each half of the blackboard. A volunteer from each half of the class, has thirty seconds or a minute to turn the squiggle into something. The class as a whole then judges and declares a winner. A problem with this game is that if one student is good at it, it stops being fun for anyone else.

Posted by msHedgehog at 20:24 0 comments

I am likely to be offline till after Christmas now. If you have enjoyed this blog, in this or previous years, please consider a donation to Centrepoint, which provides safe, warm housing, support, and advocacy to the homeless and disregarded young. You can make a one-off donation, or you can sponsor a room, and they will send you encouraging little letters about who is living in it.

Posted by msHedgehog at 14:50 0 comments


When selected for the second Test, Panesar admitted he felt the pressure. “I knew I had to be at my best, so my self-belief had to be high. I had to have that mindset where I don’t take things for granted but I commit to my processes,” said Panesar. “For instance, when I bowled that ball to Sachin (Tendulkar) which bowled him, the previous ball was a short ball, so when I was walking back I was thinking: ‘Get my mind right. How is my breathing?’ All these things are on the checklist in my mind I was ticking off. It was like I was doing a service on me.”


I find this quite a helpful way to think about following in a social dance. It can very easily seem as though the leader is the only person with any real control over what's happening. But in fact, even with very little experience, you do have a lot of control over your own dance. You can deliberately cultivate things like calm, balance, a good axis, and a good level of concentration, right from the start, and they can make the dance go a lot better even if the leader is all at sea.

For instance. I remember, oh about four years ago, dancing with a young man who had just learned that he could do fast and complicated stuff with his feet. So overexcited did he become, that he tripped himself up, and almost threw us both into the DJ. I gained a lot of confidence from the discovery that I could rescue that situation - in high heels - and keep both of us upright and dancing, hardly missing a beat, although he would have made two of me sideways. It must have looked hilarious, but it's most unlikely anyone noticed.

As you get better at it, and you lose stiffness and improve your connection, things like tension or balance problems or miscellaneous off-ness from your partner tend to affect you more rather than less - they become a lot more painful and disturbing - and mostly you just avoid those situations, which wouldn't have bothered you before. But I still benefit from finding ways to make sure that I dance well, even when the partnership isn't quite working as intended.

At the festival I went to last week, I actually thought about the interview with Monty, and when I was having minor troubles I said to myself "what's my process?" Straighten the neck, breathe, plug the mind in. Commit to my processes, and don't worry about the other stuff. Virtually all the dances I had were great. And the one or two that gave me problems, didn't mess up the next one. So that went well.

Cricket information for Americans and others:
A short ball, in this context, is one that went a bit wrong. In other situations, a short ball might be right.
The ball to Tendulkar went perfectly. To bowl Sachin Tendulkar is a thing to be wished.

Posted by msHedgehog at 23:56 1 comments

I was at a festival in Barcelona. One night I was a bit stressed out, alone, and looking for dinner. I looked into this tapas bar and there were only women visible: the lady behind the bar spoke French much better than I can manage in Spanish, so we understood each other fairly well. A lot of the menus there are only written in Catalan and English anyway. I accepted her recommendation of a dish the name of which I didn't understand at all, and it was delicious, even though it turned out to be prawns and I don't usually like them.

I loved her bar.


The festival had some excellent features (superb floor, high and fairly consistent quality of dance, delightful company, some very nice small touches on the details of hospitality) and some that didn't suit me so well (DJing style, seating approach as combined with lighting and DJing, scale bigger than my preference, some episodes of bumpiness). But Barcelona is awesome and I had some beautiful dances.

This was my breakfast. That thing on the left is hot liquid chocolate. The things on the right are porras, which are a sort of extended linear doughnut. You dunk them in the chocolate. At least, I do. 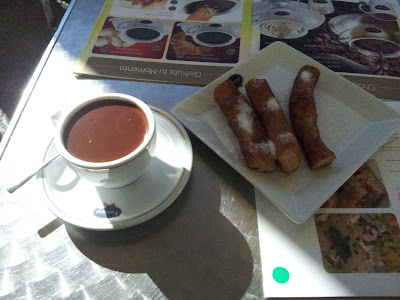 Posted by msHedgehog at 17:48 0 comments

When spouting proverbs at someone in emotional distress, be sure to  include a catastrophic spelling error, such as "cease life!" when you meant "sieze life!". It neutralises your otherwise-offensive posture of superior wisdom.

Posted by msHedgehog at 11:15 2 comments

I should never, ever allow myself to get into the frame of mind of persistently trying to dance with specific people at a festival - or even at an ordinary milonga. All it does, is make me distracted and indecisive, so that I miss out on other opportunities.

Thinking like that can work for you if you have the right kind of focus, but it totally distracts me and takes me out of the moment.

The only way to plan ahead that works is agreeing with a friend in advance that we want to dance something specific that we know is coming. I don't like it when I feel someone is chasing me, even when I would happily have danced with them otherwise, so it makes no sense to do it myself. And they know perfectly well where I am, and will come and get me. I should always look around open-minded for the tanda.

At large festivals - more than 200 people - I'm not in danger of making this mistake because I can't keep track of where people are that precisely anyway.

I watch these all the time, as soon as they come out, but this is possibly the coolest yet. The one where Ed visits the Large Hadron Collider is also pretty good, and "Confessions of a Tetris Addict" is great too, but this one, together with the extended version linked from it, goes straight up there.

Posted by msHedgehog at 20:46 0 comments