A teatime guest on Test Match Special - a member of a band called Scouting for Girls - just observed that Test Cricket is the most rock-and-roll sport there is. For what other sport can you roll up at 11:00, have a drink and sit in the sun all day, following the rhythm, the build and release of tension, the teamwork, the conflicts, the drama, the pauses, reverses, the just and the unjust, the individual battles, what other sport will fill your radio with a wholly new and often unexpected story for the long, long drive from a gig in Cornwall? Twenty20 is just pointless. This is Rock and Roll.

I think we can learn a lot from that.

Posted by msHedgehog at 15:57 1 comments

These are for two little girls, younger sisters of the Moominbaby, Little Pearl. They are very stretchy so should (I hope) fit for a while. 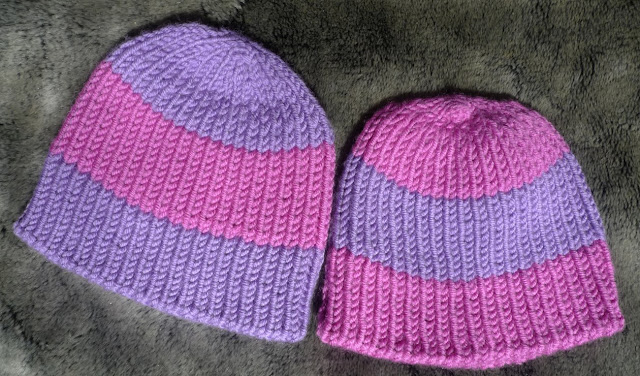 They were born earlier this year so they'll be still babies now, but quite big babies. These are roll-upable and might last till toddlerdom - they are more or less the same as the smooth striped beanie, just smaller and made of a very soft wool mix.

Posted by msHedgehog at 13:02 2 comments

Oh yeah, at Carablanca on Friday they pushed the tables on the right hand side WELL in from the wall, and raked them, so that officious punters couldn't shove them back. It worked really well, you could walk right round the back of them for the whole evening and get where you wanted to be without being in the way of the dancers, and it makes the dancefloor a more manageable shape.

Also they had a very good DJ, Luca Lamberti (from Italy so I assume he's only visiting) and they serve cheap cocktails.

Posted by msHedgehog at 20:34 4 comments

Ever since about when I went to Les Cigales I've been mainly trying to make the best of a mostly lovely summer, and haven't been that vocal on tango subjects. And before that I was upset about something. You can't waste a lovely summer, you don't know when there'll be another one. The cloudscape of Folkestone beach, shortly after rain: 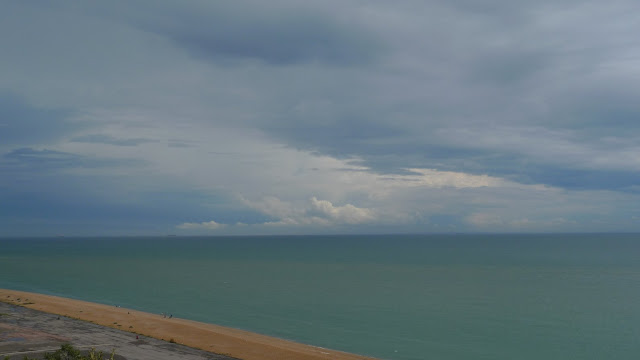 It's nice being me. 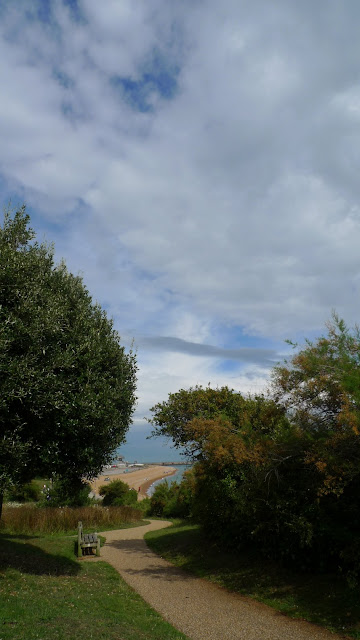 And the same from some very pretty gardens, as I walked down the slope with a friend, holding her toddler by the hand. He is not quite conversable yet but he is tall enough that I can stand up straight if he holds me by two fingers. He still has a baby grip.

Posted by msHedgehog at 23:58 9 comments

What's happening here at 01:29-01:35? Is it led (obviously where she is going is led, I mean the way she is going there) and if it is her own variation what is it a variation on, i.e. what is he leading? Is it just a forward walk with some pivot or is there some element of lean-and-drag?

I think it requires a slippery floor and when I imagine making that movement I feel that it might be naturally inspired by a slippery floor. But it looks delightfully bonkers, I think it's great just there, and I want to know what is really happening.

Hat tip Alex, who has a post with eight different performances to this gorgeous milonga.

Posted by msHedgehog at 23:05 7 comments

Can we PLEASE have some high-speed track south-westwards. I have a lovely invitation to a lovely milonga in a lovely hotel and I could get to Scotland with less time and expense, or Germany in less time with 80% less faffing about. What this place needs is a super-rich tanguer@ with a helicopter. Huh.

Posted by msHedgehog at 22:05 2 comments

Diego DJ'd at Negracha last night; and for the first time anyone I knew there was aware of, he had obtained control of the projector that hangs up somewhere above the lights, together with some sort of software* that allowed him to type messages to the room (it was displayed in real time, with typos and corrections as they came out). And he mainly said things like:

We are listening to
EL FLETE
Juan D'Arienzo
- that, and messages taking the piss out of his friends, mainly in Spanish, or complaining about the quality of the software. I loved it; it reinforced my recognition of quite a few things that I know and like. Nice work Diego, who is a good DJ and has a real influence on why a lot of people go there.

* There's a Dilbert cartoon where Dogbert in selling something to the boss. The dialogue goes something like this:

Posted by msHedgehog at 21:24 6 comments

A DJ[dancer - see comments] in the USA called Sarah L. Rattray has a useful invention: the TangoTandas Display Book, handily announcing the orchestra and singer for the current tanda, for DJs who get tired of being asked. And since it's visible to everyone whether or not they would ever have thought of asking (and whether or not they even knew there were supposed to be tandas or that they were sets of the same type from the same orchestra with the same singer, if any) a neat way to educate the public.

I've often wished there were some sort of display that could show the CD artwork, as I can remember the look of a cover, and relate it to a sound, much more accurately than names. But this is nicer than an electronic display, and seeing it written is almost as good as a visual.

It also has a "Next Tanda" supplement consisting of some reversible flash-cards saying "TANGO", "MILONGA", "VALS", "CHACARERA", "ALTERNATIVE", and a smaller book of orchestra names to go underneath so people can know who to look for and when to hide. Only think, the truly clueless could even use it to figure out the difference between tango, milonga, and vals. She's even thought of giving the book the right sort of backing so you can write in any omissions with a dry-wipe marker. So you could announce "HIPHOP" or "RANDOM BALLS" if that's your thing, but you'd have to think about it.

It's very nicely designed and presented, and if you'd like one you can order online and pay by paypal. I think it would be a lot of work to compile your own, and certainly a lot of work to present it so nicely; but there's no copyright in an idea (although there is in a compilation), so you could perfectly well do that. The book would be a bit heavy for shipping.

I wonder if this is the same as the display that UnaMilonguera observed in Paris, also used by a lady DJ, if I have read that correctly? Or was that a simpler version, with its extra card announcing "The DJ is dancing"? Obviously a simpler and lighter customised version would be possible, perhaps with an integral stand and light, and leaving out everything you personally don't use - I'm visualising some sort of fuzzy-felt contraption with NOW and NEXT headings that fits in the big pocket of a laptop bag. Obviously there's some duplication from printing orchestra and singer on the same page, if they were seperate elements you could reduce the total bulk slightly. And if you didn't make visual distinction between now and next such a priority in the information section of the display - if you could just swap them round under two clearly-distinguished headings - it would be quicker to use.

But it's neat, classy, practical and informative. I like it.

I'm not sure how to spell Chacarera. Is that right?