It's a very clear night

... with very little turbulence in the air. Where I live there is a little car park too small to have a light in the middle, but just big enough so you can stand in the middle and, at some angles, look up without any bright lights right in your view. The Pleiades and the nebula in Orion are really striking, even with the naked eye.

Also tonight I got the sharpest tango kick on the buttocks I have had for some time. It didn't hurt, but it was quite an unexpected punctuation in a nice tanda. Boink!

Posted by msHedgehog at 01:20 4 comments


Warning: this contains lots of spoilers. It's a documentary, it was only a single showing at the Royal African Society's annual film festival, and the chances that you'll get to see it are limited, so I think you might like to know what's in it. If you feel otherwise, stop when you get to the spoilers mark.

"Tango Negro" is directed and written by Angolan director Dom Pedro, who explained in the Q&A session that he was inspired to make this documentary by a football match in the 1990 World Cup between Argentina and Cameroon. Watching this match on TV in Paris, he asked himself why, given the football teams from Uruguay and Brazil, there were no black players for Argentina or Chile. A look at any globe tells you that this is a rather good question, by which I mean a question the answer to which is not obvious and might be very interesting. He decided to explore this question by means of music history.

The main presenter is Juan Carlos Cáceres. It was nice to hear from him, as he is responsible for this danceable tango nuevo track and for Tango Negro which gives its title to this film. We see him playing and interacting with other musicians and musicologists, black and white, in Argentina, Paris, and Uruguay. We also hear contributions from other musicians, an excellent drum band (pictured), instrument makers, cultural and family historians, cultural influencers, and so on. I'm sorry that I can't give you the names of the contributors, as they were only identified very briefly, and the film's website doesn't list them at all.

This is not, however, a film even mainly about music or dance. In fact, it is a mixture of musical interludes and a fascinating ramble through current cultural events and the social, political and demographic history of Argentina. I would be very interested to see a film about the music and dances of western Africa and their relationships with tango. This is an interesting film, but it's not that one.

As a whole, the core argument is: there is a common belief among Argentinians and others that Argentina "is a white country" (as evidenced by the lived experience of actual fifth-generation black Argentinians being constantly asked if they are from Uruguay), which is in a sense mistaken, but is explained by history. A secondary argument, presented as evidence for the first, is that tango music could not have happened, and cannot be properly understood, without the African people of Argentina and Uruguay, their music, and the music and dance of the Congo region of West Africa. 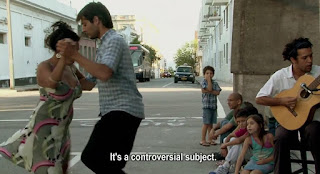 The relevant history includes the active white-supremacist policies (my description, not the film's) of 19th and 20th century governments, which seem to have taken effect in three ways: a 19th century war that was pursued in such a way as to kill a disproportionate number of black men; an immigration project of mindboggling scale; and social incentives for the assimilation by marriage of the remaining black population of both sexes into white families over two centuries. The impression that I took away from the film was that these three processes reduced the visible African-ness of the population over about 150 years from perhaps sixty percent, or even more, to a level almost invisible to the eye in urban areas, while it remained clearly audible, along with other influences, in the popular music.

There are quite long sections where musicians of various backgrounds play together and music is allowed to speak for itself. These sections are really where the musical case is made, perhaps in the best way possible. But otherwise, the subject is much broader than music or dance.

The interviews take place in France, Argentina, and Uruguay, and I sometimes lost track of where we were. The camera work in some scenes is unsteady and difficult to watch. There's no linear chronology either to the history or to the discussion, there are a lot of contributors whose descriptions are hard to keep track of, the English subtitles have confusing mistakes, and the historical events aren't very clearly set out. The music for the film is mostly composed by Cáceres and the sound is good in general.

There are very few women in the film, among very numerous contributors. Two black Argentinian women make important contributions. The first speaks very touchingly about tango as a dance and about her parents, especially her father, an excellent dancer who made a living teaching tango: she was the only contributor who gave the impression of a personal attachment to the dance itself. The second was, I think, the president of a cultural association of African-descended Argentinians, and had eloquent, powerful insights about the historical stories illustrated in her own family. They were the most memorable contributors for me. A couple more women speak briefly, and another handful are unspeaking musicians or dancers.

The general absence of women otherwise - together with the absence of any discussion of characteristic instruments, melody, or social dance practices, and a reeled-off list of Uruguayan contributors to tango that didn't include Canaro - added to my feeling that the dance itself, with its history and development, was in no way a subject of the film and wasn't of much interest to the director. That's not a bad thing; you could fairly say the film is about much more important subjects; but you should bear it in mind if your personal interest is as a dancer.


As a dancer, I would have liked to hear more from the African and European musicologists who appeared only at the beginning. I wanted to know more about the Angolan and other West African partner dances that were mentioned but not shown. I wanted to know more about the word "tango" and it's meanings in various West African contexts and languages, which were mentioned, but not gone into. It's an odd sort of word, that anyone might wonder about. I wanted to hear more about candombe, the music and the dance and the events related to it; a "candombe ceremony" was mentioned as having been practiced annually and later replaced by a carnival, but it wasn't explained. It's possible that the expected audience didn't need that explanation, I don't know. The Kizomba part turned out to be only at the afterparty, which I wasn't still awake for.

This was not that film. This film addressed the question about the football match, the answer being partly "there actually are, in a sense" and partly "because policies sometimes achieve their aims". It told me a lot of things I didn't know, was touching and funny in places, and includes a lot of very enjoyable music. It wasn't a film mainly about dance, or entirely about music. But it inspired me with a lot of questions about those subjects, and if someone would like to go and make that film, I'd be happy to make a modest Patreon contribution.

While waiting for my friends to arrive before the showing, I spent about thirty minutes going through the modest collection of tango music on my 'device' and making a playlist of those tracks whose titles or lyrics unambiguously say they are in some way or other about the the lives, music or culture of black people. Only half of them are milongas. All of them make some kind of musical reference beyond the lyrics, and someone who knows their music and lyrics better than me could certainly follow those musical threads to a much broader playlist. Here is what I got in half an hour, as a YouTube playlist. I'm sure many of my readers can do better, and even make tandas, so go ahead and post playlists in the comments, using any way of choosing you think is interesting, if you feel like it.

Posted by msHedgehog at 22:24 6 comments