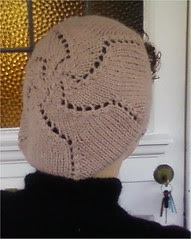 Beret
Originally uploaded by mshedgehog
I still had some aran-weight angora left over, so I've made a beret to go with the Pair of Sleeves.

I was working on 5mm needles. The hat starts at the bottom edge, and I repeated the pattern six times around. You could work with any yarn and needles, and cast on any multiple of six that gives you a good fit around the intended wearer's head. Divide your number by six, and the answer is the number of stitches between the yarn-overs on the first pattern row. The rest of the yarn-overs just arrange themselves on top, and you would continue till you were down to 18 stitches; you might get an extra zigzag and the middle would look different. Or, I suppose you could add or subtract a pattern repeat, and you would get a heptagonal or pentagonal beret.

It's a little bit big for the Intended Wearer - no-one could accuse her of bigheadedness.

Join into a round. The cast-on leaves a little gap, which you can sew up at the end. Do 1x1 ribbing for three rows.

Place a marker at the beginning of the round. Otherwise it's very easy to find yourself mixing even and odd rows. You will have to move the marker eventually, because it will get into the middle of a decrease. Just make sure it's always between the same two YO-decrease sets - after the last and before the first. Move it just enough to get it out of the way, no more.

Row 1 and all odd rows: k.
Row 2: k12, (YO, k12) 5 times, k6, repeat to end of round (first row of chart).
Continue from chart, because it's the best way I have of explaining it. Keep the YOs in the right places in relation to each other and decrease before or after them as shown. I tried counting all the stitches in between but it just makes a simple procedure seem complicated, and I'd certainly make mistakes.

When you are down to 24 stitches, change down a needle size to make the top of the hat nice and flat (this tip is also from Techknitting). After 2 more rounds there are 18 stitches. When you get down to 18, knit one more row, then arrange them as 9 on each needle and graft them together. Sew up the little gap in the cast-on, and block to shape.

Essentially, we increase to 102 stitches by adding yarn-overs. Then we keep adding the YOs, but for each YO we do a double decrease immediately before or after it, so the net effect is to decrease by one. We arrange the YOs and their decreases in zigzags so that we make a flat hexagon, then close the top. 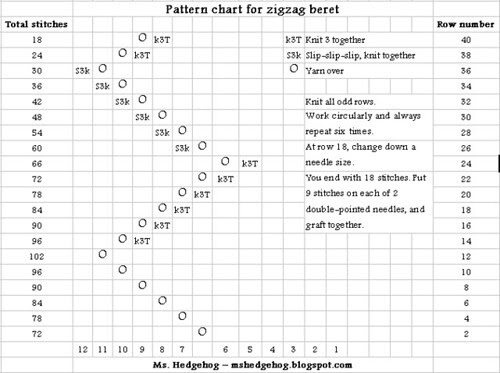