i want one of those

Just before Christmas I was wondering if January would be the right time to get a good digital camera, and still thinking the answer was, regrettably, no. I still hadn't seen a digital compact that I wanted to own, and a digital SLR just didn't seem right. I already have a perfectly good film SLR, which makes beautiful pictures, but film is the least of its disadvantages.

But then I was in John Lewis buying my Dad's birthday present - a thing so he can put Great Blues Men in his podlet. And I saw The One.

It seems like someone in Panasonic's office said "That bird over there has been Not Buying digital cameras since 1999. It gets my goat. I know what we'll do, we'll chill about the pixel count, chill about the zoom, put a bigger sensor in, give it a proper lens and ISO3200 at full resolution, and make it a compact. And we'll make it look so sexy she'll think she's Annie Leibowitz. Then she'll buy it."

Two weeks later (after the post-Christmas payday) I had to order it, because it was out of stock. 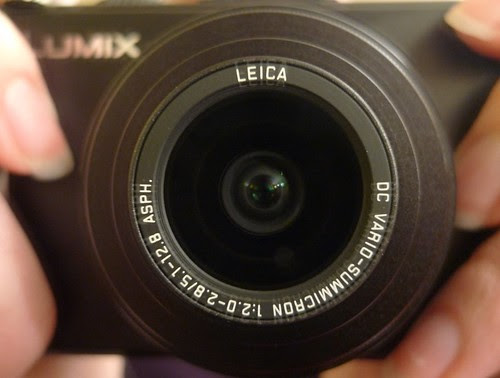 It's beautiful. It doesn't come with a case, so I'm knitting one.

Not sure about the tango photos - I'm usually busy dancing. And, on the whole, I think I prefer to respect the privacy of the people I dance with. I mainly just write about myself and in general terms. But maybe for special events.

You can see some great tango shots at Carole's, though.

I find it hard to take the time out from dancing to focus on good tango shots + I find flash a bit intrusive so feel less inclined.
I do find the local sun afternoon tea-dance a good place for avoding flash-use, and focus a bit more on feet/shapes than folk - all a bit amateurish though.