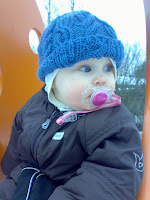 Here is what the Muumibaby looks like now, wearing the hat I knitted when I was there. A little pearl with bright blue eyes. I'm so glad I chose this cloudy blue for her hat. It looks perfect. She can crawl around now, and pull herself upright.
The hat is, if I remember correctly, four repeats of a layout of two different cables. One of them is just a plain six-by-six cable. The other one is an interesting double cable. The cross happens over two rows. You decrease by one stitch on the first, and replace it on the second.
I recommend knitting all knit stitches in this cable through the back to give the appearance shown.
Set cable: k, p, k, p2, k, p, k.
Cross row 1: (on right side): sl 3 to cn, hold to front. ssk (this loses one of the centre purls), p1, k1, p1 (this will be one of the two new centre purls), then k1, p1, k1 off cn.
Cross row 2 (if knitting in the round): k, p, k, purl front and back (restores the missing centre stitch), k, p, k.
Cross row 2 (if on wrong side): p, k, p, make one by lifting and knit it (restores the missing centre stitch), p, k, p.
k = knit, p = purl, cn = cable needle, ssk = slip 2 and knit them together (i.e. decrease by one).
I crossed the double cable every nine rows because I like the resulting relationship with the six-by-six one, but this is awkward if you're knitting flat, because you'd be using the cable needle on the wrong side. If you want to knit it flat, it would be much easier to start crossing on an even numbered row.
To make the hat, do three repeats of that pattern in double-knitting wool, and when you have crossed the double cable for the third time, start decreasing on every row at four points around to make it hat-shaped.
Isn't she beautiful?

Wow! She grew so big so fast!