This was the first Raduno Rural. Blaž Demsar, who some of you will know as a dedicated goer to other milonguero festivalitos, comes from Slovenia, where his family run an 'Agriturismo', which is a sort of cross between a farm and a holiday resort about 900 metres above sea level. And he dreamed up this. I'm hoping they'll do it again next year. This was the programme:


The Class/Workshops: There weren't any, it's not that sort of festival.

Layout and Atmosphere: Let's start with the view: 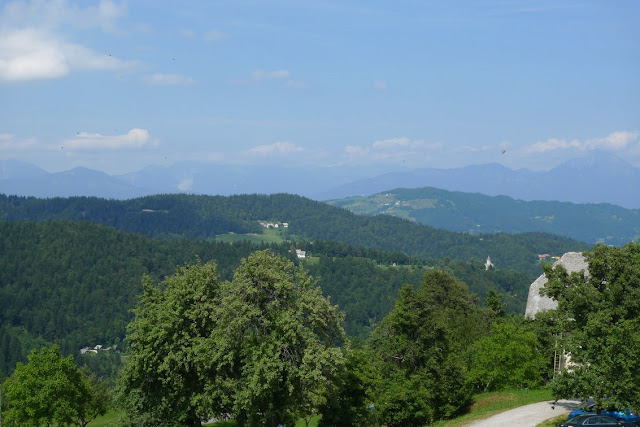 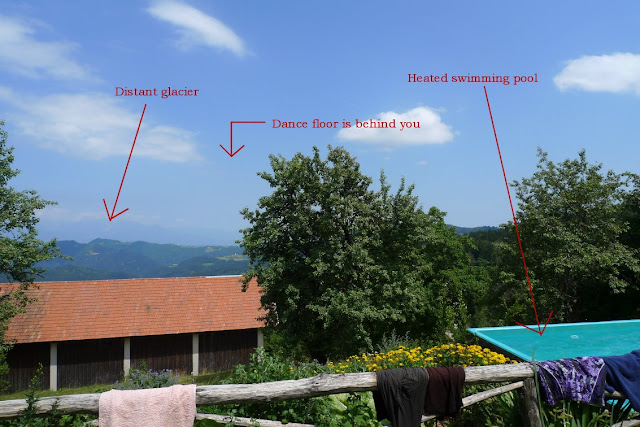 There was a barn, with an upper floor, I suppose it was a hayloft. They took out the boards and replaced them all, then they added a layer of carefully-spaced foam strips, then a layer of some sort of smooth boards made of pressed recycled wood shavings, and then maybe some sort of varnish. The result was the best floor I've ever danced on - absolutely beautiful. The perfect degree of grip, and soft on your feet. Neither my feet nor my knees ever stopped me dancing, only the need to sleep. About 100 people were registered and it was just nicely full, not too big and not too small. Here's the dancefloor at the start of the Sunday afternoon milonga, nearly empty. There were rolls of felt that came down to cover the open parts of the walls during a cortina when it started to get chilly late at night. 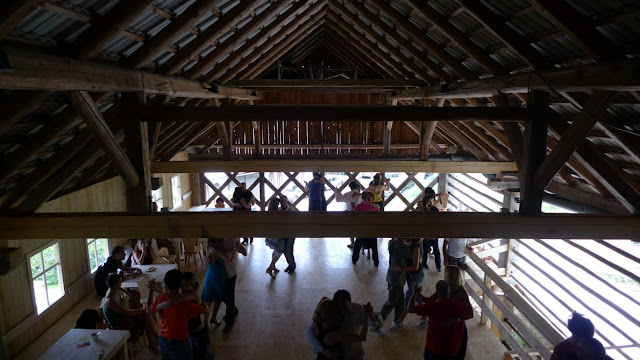 Returning to the barn - then they added a staircase, benches along one wall, and a lot of little tables and chairs in new softwood. As far as sightlines were concerned, it all worked fairly well. I had decent results from staying in the same place, rather than chasing around, which is usually a good sign. But some of the seating was under a mezzanine at the DJ's end, and it was a bit dark there in the evenings. Lighting and sound were good, a little more white light in the evenings wouldn't hurt but I really couldn't complain. They're likely to tweak it a bit for next year. Downstairs were the tables for dinner and barbecue, hay for the low-budget sleepers, a clean and roomy loo, and walls also made of hay. The whole place smells of hay.

As for atmosphere, well, what can I say? It was super friendly and happy. It was mostly Italians, they're really enthusiastic. And Hungarians, Slovenians and Austrians, and at least a few French. Most of them danced well, some superbly. And me. Everybody had brunch together and dinner together and swam in the pool and lay on the grass and chatted in various mixtures of languages.

The following day, at a table behind my right elbow as I take the following picture, I observed an Italo-Hungarian game of what I understood to be Texas Hold'em, in Speedos. 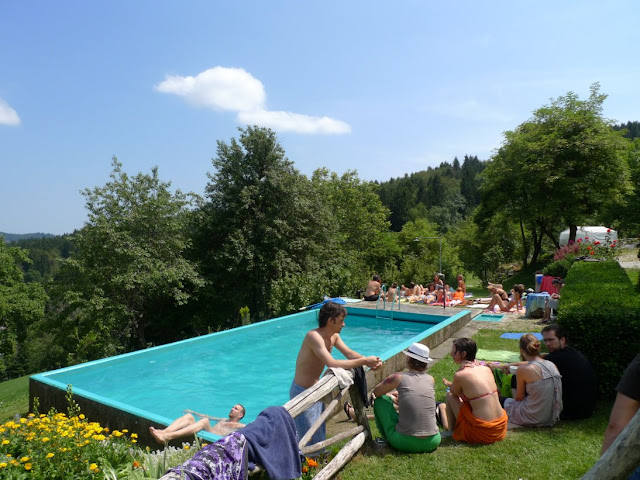 It did get a bit chilly, around 15C, late at night. I found the temperature ideal for dancing, but I put my fleece on if I sat down for more than one tanda. The felt walls kept out the wind, but they're working on something to deal with the gap between wall and roof for next time. You need something warm to put on when you're not dancing or it's not so sunny.

Hospitality: Excellent. Quite apart from the lovely rooms, a long dancer-friendly brunch was included, plus the barbeque on arrival, a very nutritious four-course communal dinner with drinkable Slovenian plonk on Saturday evening, wine and water and a couple of kinds of home-made squash during the milongas, and doughnuts and coffee at 03:00. What else can I say? Dinner was served in the barn under the dance floor, at long tables with red cloths. The whole thing was designed by Blaž Demsar, who likes to dance all night, and catered by his excellent family, who run this Agriturismo place. People go there to ski in winter. (The ž sounds like French "ge" or Argentinian "y" or "ll").

Anyone or anything interesting that turned up or happened: Not a performance in sight, fantastic! Just social dancing.

What I thought of the DJing: The DJ lineup:

All (of course) played traditional music, tandas, cortinas, properly constructed, TTTVTTTM or similar.  Enrico Malinverni delivered as usual for the Friday (his Francopop cortinas make me happy) and so did everyone else. Except that Alan Spotti wasn't so much my thing - I thought he started well and ended well but had a too-looong period in the middle sending people to sleep with unrelieved pretentious drama (late-era, I suspect). Maybe taste, I dunno. But otherwise I thought it was all great. DJs will differ next year, obviously.

Sound was excellent throughout. They hired the system and installed it for the occasion. You could feel all the detail everywhere.

Getting in: My €97 included 2 nights accommodation on site (a comfortable pair of rooms shared with three Italian ladies and one from Kyrgyzstan, she hadn't come from there specially, though, only from Graz), full board and all four milongas. And swimming. There were also budget options down to €38 for a milonga pass, or €48 for more basic accommodation; people pitched tents on the grounds, came in camper vans, or brought sleeping bags and slept on the floor indoors or in the hay underneath the dance floor. There are good facilities for having a shower and getting ready inside the building downstairs if you don't get a room.


Getting there and getting home: It's half way up a mountain in a country that seceded peacefully from Yugoslavia in the 80s, apparently by erecting a Somebody Else's Problem Field on the border. You need to drive, or organise a car share from one of the nearest airports, three of which aren't in the same country - any of Ljubljana, Klagenfurt, Venice, or Graz. Slovenia exploits its strategic position as neither-here-nor-there by a system of very good through-roads, with toll charges just high enough to be somewhat annoying, but not high enough so that anybody bothers going the long way round from Austria to, say, Greece. You buy a sticker at petrol stations and stick it in your window, and then you drive slowly through the automatic toll gates. I was the person who'd come furthest for the event - it makes most sense if you're coming from Austria or Italy. I flew Ryanair to Graz and was collected from the train station by a delightful young tanguero who was a friend of the organiser. Our satnav got a bit confused by the toll roads, and a bit overexcited about all the hairpin turns up the mountain. But combining it with Google Maps and the directions provided by the organisers, we didn't have any serious problems.

How it went: I had a fab time.  Friday night and Saturday afternoon were my favourites. I went swimming. I danced and danced and dance, and danced almost entirely with people I'd never seen before. On Friday I don't think I sat down for more than 2 tandas even once. They didn't promise to balance numbers and I think there a few women over, but it didn't matter much because there were only 100 people, so everybody could find partners and share around. There was a wide range of styles going on, but the line of dance was mostly ok (although I could have done without the overexcited pillock whose violent, inane boleo gave me a painful bruise). Everybody else seemed to be having a wonderful time as well. At dinner on Saturday one of the Italians stood up and declared three cheers for Blaž and three cheers for the family, and he got them, three sharp, full-throated cheers, twice. He was a lovely dancer, too.

Oh yes, local customs: I got all by my first one or two dances by cabeceo alone, and I had the chance to refine my technique at that a bit. As is usual at this kind of event, same sex dancing and reversing roles are not an issue for anyone - everyone picks up very quickly on which women can and do lead and which men can and do follow, you just make the cabeceo a bit more obvious if you haven't danced with that person before.

There was good, simple food. The doughnuts at 3am impressed me. There were a couple of dogs (brought by guests, and welcomed) and some very small very blond Slovenian children running around.

If you got into the swimming pool and stood on tiptoes with your arms on the side, just where the warm water comes in, you could look across the valley and see high mountains and distant glaciers on the other side. It's the sort of place and activity that puts you in the sort of mood where you can be blown away by the wondrousness of a hoverfly in front of your face. There's a little herb garden above the dance floor, with places to sit and read or write or contemplate the view.

Look, the whole thing was totally, utterly bonkers, and I loved it. I had a ton of fun and I felt like my dance was really cooking.

Wow, this sounds like paradise. Thanks for your lovely review!!

Sounds great, wish I had been there. I hope there will be one next year. Congratulations to Blaz!

It does sound totally gorgeous and the perfect antidote to certain other less-than-optimal festival experiences, so huge bravo to Blaz and big bravo to you for braving the bears.

Sounds heavenly, and I don't even tango!

@Limerick - hehehehe. I had to look that up. Cool name!

@Lynn - I wasn't scared of the bears. I was just having a mad-as-a-fish week.

I know - the bears were just symbolic of the unknown and the travel wobbles :-)