My knitting has been scaring me, but I think it's going to be OK.

This is my first swatch of mosaic knitting. 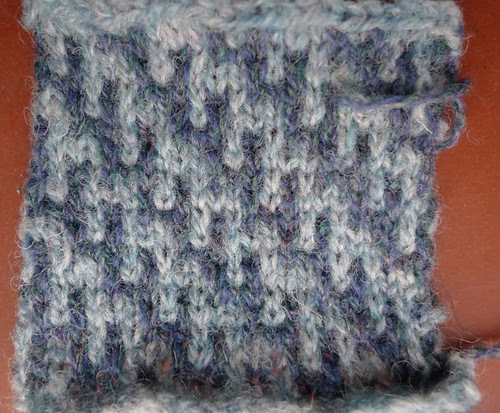 Here is the back of the swatch - if you know these things, it looks quite different from Fair Isle. 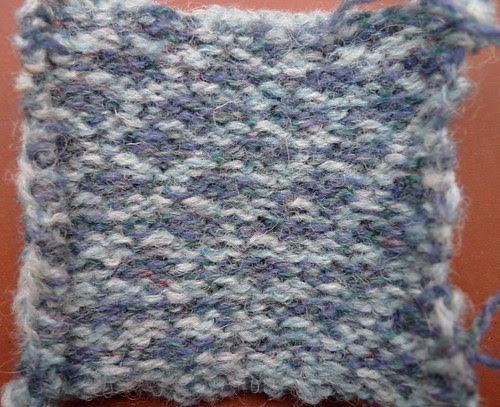 It's a very ingenious way of making a beautiful all-over pattern in two colours. On each row, you use only one of the two colours, and you slip the stitches which are to be in the other colour. You follow a chart and it's much easier than it sounds. I learned it from Charted Knitting Designs by Barbara G. Walker.

It isn't constrained by all of the same rules as Fair Isle. You can get away with longer 'floats', and it doesn't depend on difficult and precise control of tension. The downside is that you end up knitting and purling every row twice. I still think it's quite possibly faster than Fair Isle. It's certainly less maddening.

It also gives a subtly stripy look. I particularly like how it works with these two shades of Shetland Spindrift. Here's a closeup of my project, in another pattern. 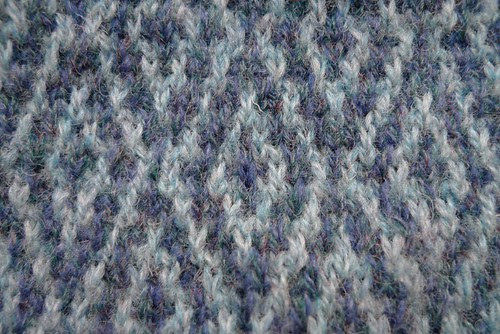 All the Shetland colours are a little bit heathery, and a lot of them look better in combination than alone. These are "Pacific" and "Sky".

Here it is in bulk. I'm making a woollie for myself using a vintage pattern that's designed for Fair Isle. I do think it's beautiful and I really want to wear it. The gauge is much finer than I would normally work at, which is why it scares me if I think about it. So I try to just do some on most Tube journeys and not think about it. I've nearly finished the front, which is encouraging. And I'm knitting every row twice, so if I make another the same size and shape in mostly plain knitting, it will be faster. 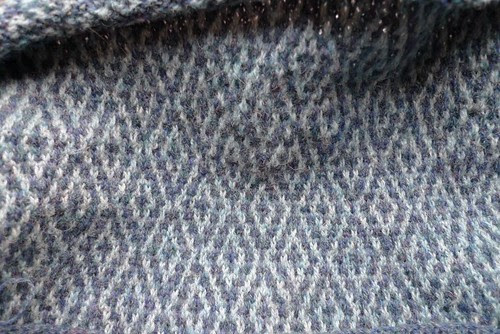 The technique means some adaptation of of the shaping instructions. My solution has been to work shaping only in one of the colours. In effect, I only count one of the colours when I count rows. So far, it seems to have given the right shape.

Although I've now done at least one-third of a sleeved sweater, and I think I've solved the problems of increasing and decreasing and casting off, I still don't feel I clearly understand why or how it really works. It still seems magical, as though I'm uttering incantations and doing it by rote. I wish Techknitting would explain it. Maybe I'll understand by the time I've finished the back as well.

What a lovely combination of colour pattern. I am in awe of your work, as I have not tried my hand at two color knitting.One day...in the meantime I feast my eyes on your samples. Would love to see the finished piece.

I have just seem an article on Twined Knitting and wonder if that is the technique you were using. Below you have my google search with some examples of it.
http://www.google.com/search?sourceid=ie7&rls=com.microsoft:en-US&ie=utf8&oe=utf8&q=Twined+Knitting

it's not twined knitting - it's much simpler than that. It's a slipped-stitch process. You follow a chart which is black and white squares. In each row you use just one strand of yarn, either dark or light. On the right side, you work the stitches that are to be that colour according to the chart, and slip the others. On the wrong side you just repeat the process - working the stitches that are in your working colour and slipping the others. Then you drop that yarn at the right hand side of the work, pick up the other, and start the next chart row. And repeat. As in lace patterns where the wrong side rows are always purled, wrong side rows are not shown in the chart.

It's really easy to do, much easier than fairisle because you only ever have one colour in your hands at a time. What I don't yet understand is what the rules are, and why, for what works if you're designing the chart.

Thanks for the explanation, that simplifies things a lot. I might even try a sample if only to lose my fear.