I wanted a change this week and went to a milonga people had recommended to me. It's called El Porteñito and it's every other Sunday (mostly), at the Bedford pub, in Balham. It's organised by Leo Fandango and Bridget Mayer. Don't be too alarmed by the studio photos under 'shows' - in real life Leo is very nice and looks nothing like a Vulcan in the mating season. Really. At the time of writing they also do classes, currently on Mondays and Fridays, and a milonga on Fridays at a different location, see website.

The class: I was too late for the class, it's too far away for me. The room would be nice for a class, though.

Layout and atmosphere: Good sized rectangular room, nicely lit, chairs around the walls with tables at intervals, a DJ desk in the far corner, and a bit of a stage for the band across the end. When I came in, the band had just been introduced. Almost all the seats were occupied, the floor was nearly empty, and I had to hover for a while feeling embarrassed and exposed before people got up to dance and I found somewhere to perch. Next time, I'd stop in the downstairs bar to change my shoes. The tables are round, and big enough to give you some protection and make you feel as though you're not actually sitting on the dancefloor itself. Attractive silver tablecloths, large windows with dark curtains. The room was airy and quite cool on a very warm evening promising thunder. I was told that it was a bit empty, but I thought there were plenty of people there, so it's a popular place. The crowd was a fairly good mix of ages. The floor is good, smooth, and nice to dance on, if a little bit slippery - enough to be alarming with any leader who throws you around. If you want a rest, there's scope for retreating to the downstairs bar, but if you're in the room at all, standing on the dancefloor or sitting on the edge of it are your only options. The atmosphere generally struck me as friendly and I saw quite a few people I knew.

Hospitality: good. It's a large, pleasant, comfortable pub. You can eat there if you're not too late, from a menu with modest aspirations to gastronomy. My G&T and a pint of cold tap water with ice were served with a smile and cost £3.60, I think. The loos are about as clean as you'd expect from a large pub, the doors a bit rickety, but well supplied and working. I don't think there was anywhere to hang your coat upstairs, and as it was so hot I hardly had anything with me. But there was a room off to one side through the main room that could have been used to put things down - tonight the band were using it, though. There is also quite a lot of scope to tuck things under tables and hang them on chairs, and there are broad ledges at one end of the room with space for a lot of people's kit.

Anyone or anything interesting that turned up or happened: There was live music for most of the evening, with Carlos Quilici on bandoneón (and percussion - sometimes using the instrument, sometimes the floor) and Javier Fioramonti on guitar. They played traditional tangos, milongas, and their own compositions including a sort of milonga-candombe, with cheerfulness and verve. They had some CDs for sale. Carlos has a website, I can't find one for Javier.

What I thought of the DJing: a lot of the time it was live, and the band played what they felt inclined. They tended to do couple of tangos and one milonga, but Carlos always announced the milonga so you could opt out if you weren't ready (I hate getting milonga sprung on me unexpectedly when I'm dancing with someone who can't dance milonga). Their variations of rhythm are probably enough to throw you if you're not used to live music or you need a very strong, explicit beat, but I didn't feel there was anything eccentric or inconsiderate there. When they weren't playing, Bridget DJ'd, playing a little bit of modern as well as traditional, with quite a few milongas. The sound system was fine, I could hear everything properly from everywhere.

Getting in: it was £8 with live music, a bargain. 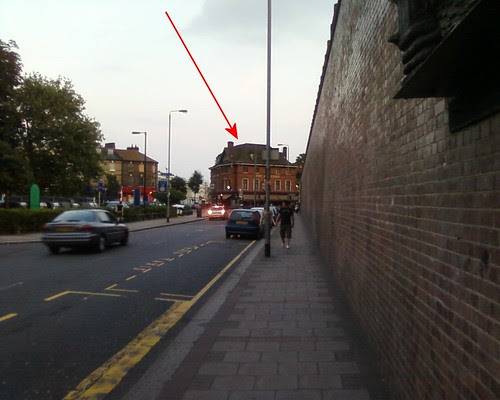 Getting there and getting home: from Balham tube, take the exit for the train station, opposite Barclays, and walk to your right, past a couple of shops and along the long brick wall (pictured). You'll be able to see the pub when you get past the shops. Watch out for the awkward, dangerous pedestrian crossing at the end. When you get to the pub, there's no clue at all that there's tango anywhere. Go in the main entrance and turn right, go through the door where the tapestry is, and right again, out into a little porch, where you do a u-turn and go up the stairs. The downstairs bar is roomy and pleasant, you might stop there to change your shoes. It finishes at eleven, so you can reverse the process to get home, as long as you don't dawdle - remember it's Sunday.

The website: Does the job much better than most. It's well organised, easy to navigate, tells you what's on, when, where, how much it is to get in, and what events you can and can't bring your own drinks to. Leo's little article about what he thinks it's all about is worth a read.

How it went: Quite well. Even on a thin night, there were a good number of people there I wanted to or was willing to dance with, enough of whom felt the same about me. I'd probably go there regularly, if it wasn't an hour away, and on Sunday. As it is, it's high on my list for Sundays when it's a bank holiday or I otherwise have Monday off work.

I saw Javier Fioramonti play at the Oldway Mansion in Devon last June. He played as a duo with Ninon Foiret who together form part of the group Fueye Tango.

They played a lot of excellent danceable music, some of it quite challenging though.