Well, I've finally caved and given Comme il Faut tango shoes a chance.
The ladies at the Adelaide had about thirty or forty styles, ten or so in my size. I was pleasantly surprised by the sizing. All the size 37s I tried were recognisably size 37, which was not the case when I did the same thing with Bianca's Darcos stock last year. The width around the toes is reasonably good; I would have expected long and narrow fitting, Italian-style. That means that, having tried some on, I might order online if I really liked the style.
I'm very far from crazy about most of the Comme il Faut styles. The heels look anorexic, the toes are often mean, the surface elaboration fussy, lurid and pretentious. The general effect is of plastic tits (another commodity popular, and cheaper, in Buenos Aires) falling out of a too-small bikini. It has Footballers' Wives written all over it, minus the satire.
Their irritating marketing, success in the States, and distinctive 'look' also means that a pair of these are, inescapably, how you pretend you've arrived. I dislike this. I'd generally prefer to under-promise and over-deliver rather than the contrary, and I'm unwilling to risk being another average dancer wearing pretentious, attention-seeking shoes. Another downside is, of course, that they're very expensive. Shipping costs have recently ballooned, so every style on offer was £120.00. That's at least £150% of what I'm generally willing to spend, but it's about the same as my Taras, which are well made and I do like.
However. They have so many styles and colours that they can't help getting it right now and then by brute force of trying. At the Adelaide there were three styles I quite liked, a plain red suede which wasn't in my size, a dark blue which wasn't either, (and I have blue shoes already) and a slightly bluish green-and gold in my size. Most of the styles go with nothing on earth, but I wear a lot of green and blue and I thought these could be made to go with several of my outfits. This style is pretty, the 'look' might grow on me, I can afford them, and it's a poor heart that never rejoices.
And the main reason - I hear far too much about them, and I can't know if they're really so great or not until I have a pair of my own and give them a chance to perform. I know people who have them and love them and love dancing in them; I also know people who have them and never wear them because they look silly and don't go with anything, or just don't work. These people naturally tend to be quieter about having wasted their money than are those who made a good purchase, so it's hard to know how many of them there are. I suspect that even people who rave about them often have a few unused pairs in the back of the cupboard, which is a bit poor at £120 a pop. 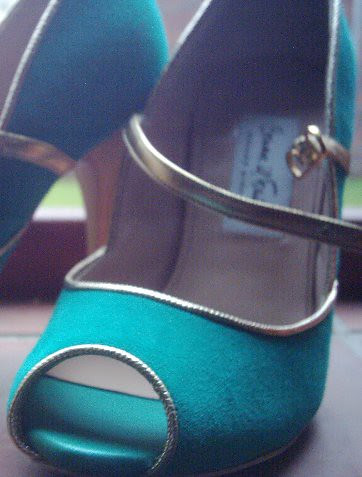 So here they are. Getting them out of the bag and taking a picture, I like them more than I did before. Trying them on with the intended outfits, a sharp excresence of plastic on the left heel immediately damages my skirt, and I realise that the green is indeed lurid and doesn't actually quite blend with anything at all. But in the dim light at a milonga, it won't matter. Walking around the flat, I'd say the comfort level and stability are both inferior to my other shoes of the same height, and the soles feel very flimsy, but they're probably OK. A pair of Party Feet makes them wearable, but I think I'll want to add heel cushions, too, before dancing in them for long. I'm a little dubious about the arch - I'm not convinced it's in contact with my foot, but I'll have to see how that goes with wear. I now like them slightly less than when I took the picture, but I feel they might wear in well. Practicing a few forward-back-side-forward turns round a chair doesn't disabuse me of the idea that when I first test them, I should take another pair with me as a change.
So, will I regret my purchase? I don't know yet. I'll put them into action this week. [Update: results here.]

I gave up wearing anything but Commes long ago. For me, nothing else has the same stability in the heel. Neotangos, for example, are much flimsier. The upside of that is that they're more comfortable on first wearing than the Commes, but I find they soon get warped. Tango Brujos are supposedly incredibly comfotable, but I just can't stand the look of them.

But everyone likes different things in a shoe. And even for those of us who love them, of course they're not perfect - like pretty much every Argentine product you'll find tiny bits of shoddiness - the odd badly place hole in the strap is a common one.

Yeah - I have to be honest, I just don't think most of them are for me. I have a particular style of dress, and the intersection with CiF is quite small. But there is one, so considering how many people like them whose opinions I have reason to respect, I'll give them a chance. I might have been less bitchy if it wasn't for their marketing, which adds a mental baggage that's very unfair on people who really do like them for themselves, which must be practically all of the people who wear them often.

It has to be said, my non-tango friends are regularly astounded at the style of Commes I'm prepared to wear. Some of them they love, but others they think are hideous. The thing is, I'll wear colours and patterns in a Comme that I'd never wear in anything else. I'd never dream of stepping onto the street in a leopard print, for example. The context makes it acceptable for me to play dress-up, I guess. Different rules of taste apply. But even I won't go near quite a lot of them. But then that's part of the fun - there's something for everyone. Well, everyone that likes tiny stilettos.

Yes, the baggage is annoying. But ultimately I don't much care. They work for me.

It's interesting how far they've changed my eye for shoes, though. Anything heavier now looks incredibly clunky to me. I'm no longer stopped dead by a window full of Manolos. Nothing but Commes looks right to me! Though I am developing an odd fondness for unconventional trainers.

Ms. H - I'm with you. I actually visited the store while in BA and it was a bit like Philene's Basement during a sale. Women all over the place surrounded by towers of these psychedelic shoes.

I did end up buying two pairs, neither of which "look" like CIFs because they're so demure and conservative, even though they do have their heels.

But what bothers me more than anything about them is how open their toe is. Having hand my toenails almost ripped off several times during my tango life, I simply do not enjoy leaving my tootsies as vulnerable as CIFs designs make them.

On the positive side, I can and do also wear them to work :-)

Oh, that's one of the things I like about them! They're open enough that my toes can move freely. Most of your balance is in your toes, you know. My feet are a touch wide, so in closed-toe shoes I feel like my toes have been strapped together.

I do have permanently messed up toenails, though. I just accept now that I will never have neat toenails as long as I dance tango.

I'm with Psyche on this one. My feet are (unfortunately) somewhat wide, and although I still wear closed-toe shoes sometimes, I generally prefer the open-toes. But Comme il-fauts have become way too expensive for me. Here in Germany one has to splurge at least 160 Euro on them (shipment not inclusive). So mostly I go with Neotangos: they are relatively comfortable, not too flashy (mostly I buy them in black though) and good for my feet. But I’m looking forward to your report.

Although I agree with all the comments here and believe that all of us to some extent become victims to this shoe fantasy, I have to commend you on a gorgeous pair of shoes. I love the color and the style!

I have several brands of shoes, including some NeoTangos that I love, and like everything else in life, is appreciated on an individual basis.

I have a couple of pairs of tango shoes that I found I cannot dance in for various reasons, and now I wear them for other purposes. But I'm still glad I have them.

So far (two weeks later, a couple of dancing sessions in them), I'm underwhelmed with them, functionally. They give no protection whatsoever to the balls of my feet, so I risk long-lasting, painful injury. They also tire my calves, and I wouldn't wear them on every floor. They'd be my least good choice for a long session. They certainly aren't better quality than the other shoes I have - they're less comfortable, give me no technical benefit, and are very much on the expensive side. However, they do one job stupendously well - attract the gaze. I think that's the real aim of their designers, and they certainly deliver it. They might be a good choice if I were away and went to a place where no-one had ever seen me before. I'll certainly wear them every now and then, especially in summer, when they go with the outfit.

Hi,
I am not really sure my luck was the same as the other girls here. I bought my shoes when I was visiting BsAs. After a long labor trying to go through the first wave of shoes (I was shown what I would refer to less than perfect pairs before I could get the right ones). The look of the shoes were very nice but there are few things that can be improved, the cushioning of the shoes is a bit slim and you will feel it after an hour on the dance floor. On the other, one of the shoes I bought did not last me more than 3 months (1 to 2 wear per week) before starting to loose shape and getting loose (stiches were coming off the leathe!).
Overall, I would say that I will go for Comme Il Faut for the look but definitely not the comfort or quality.