Some time ago, I had to read a document of what is called "Gap Analysis". For those who are spared such things, this represents a transaction in which a list is made of what changes are desired to some existing thing in order to make it fit some real or imagined requirement. Of course it can happen that one or more parties to this transaction lack desirable expertise, in which case the document can be embarrassing to read, and this particular example I remember included requirements so breathaking in their ignorance, arrogance, and triviality, ‘requirements’ that combined such total absence of real benefit with such enormous labour of implementation, that I found I had written in the margin “Marie Antoinette”.

To recover my sense of proportion, let me tell you about Sèvres. (All the pictures in this post are my own). 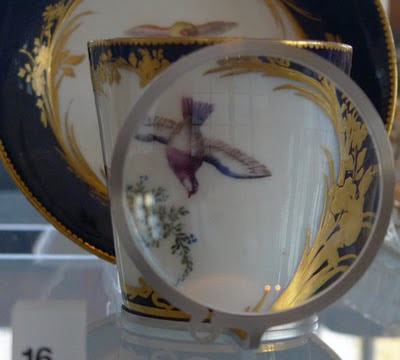 Last year I used up some odd holidays by going on a short course at the V&A about the history of European pottery and porcelain, in which the porcelain factory at Vincennes - later Sèvres - figured prominently. It never made any money. It was bailed out repeatedly by the King Louis of the time and heavily patronised by Madame de Pompadour and all the top people, but there was no way it could ever have made any money. The stuff just cost too much to make. What it made was not money, but things of perfect luxury.

First of all, Vincennes 'soft' porcelain paste is very difficult to work with, much more difficult than the 'true' hard-paste porcelain they were trying to imitate, which requires raw materials that weren't available at the time. There isn't all that much clay in the mixture and you can't really model it or throw it on a wheel. Just making the shape is very far from easy.

So suppose you now have a tiny teacup. It's pure white, with a beautiful matte texture.

It's glazed with a clear (and highly poisonous) lead glaze, and fired again at a lower temperature. Now it looks like white glass.

In every firing, some of the works will break, and more than a few. 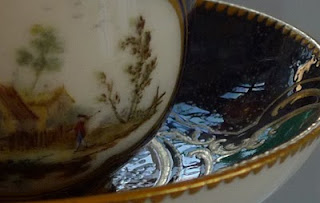 The coloured enamel ground is painted on. The colour looks nothing like it will look after firing. It's fired for a third time; if the kiln is too hot or too cold the colour will be black or violet. If you get it just right - with the technology of 1750 - it will be a magnificent blue. Or you might be working with an equally temperamental Barbie pink or brilliant green. The teacup in the picture would sit nicely in the palm of my hand. You can see that the deep blue has been worked with little dotted circles like a fancy textile.

All the colours are made from powdered metal oxides, mostly extremely poisonous.

Flowers, or a miniature scene after Boucher, are painted on by an excellent painter of miniatures. Not all the oxides fire at the same temperature to get the desired colours, so they have to be done in stages, in order of decreasing temperature. The work is fired for a fourth, fifth, and perhaps sixth time, once for each group of colours.

If there is an thunderstorm, you may open the kiln and find that everything in it is fused together. 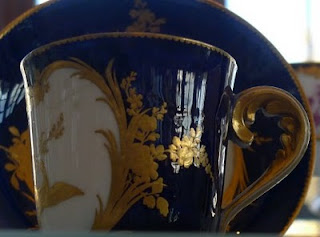 Powdered gold is painted on, mixed with a fugitive goo of some kind, possibly derived from honey or garlic. The gold is fired - the fifth or more likely the seventh firing.

The thin layer of gold is burnished and tooled with stone tools. At this point more layers of gold are added for thickness so that extra tooling and shading can be done, sculpting gold flowers in low relief. Each layer means another firing. On the right is a closeup of the gold.

When, as part of the course, I looked at these works of art and held some small examples in my hands, it was borne in upon me that even if you bought them now, two hundred and forty years later, with the rarity and history they have, the prices of £2,000 for a cup and saucer, £6,000 for five bleu celeste plates, or £27,500 for a vase a ruban of 1770, do not even remotely approach any reasonable valuation of the fantastic amount of effort and the craftsmanship that went into making them as they are, even ignoring the numerous deaths from poisoning and silicosis.

The reason they don't make them like that any more is not that it can't be done, but that it isn't worth doing, because a capitalist society can't produce that. People just make what they can sell for more than it costs them, plus whatever they can do in their spare time to please themselves. And even now, with the gross and outrageous fortunes that exist, it seems that there is no one, no one at all, who has the right amount of money and whose priorities are quite sufficiently fucked up in exactly the right way to cause the production of anything really equivalent to a 1760 Sèvres vase. Or if they do, maybe they do it in Burma.

[Update; fixed cut-and-paste error in realised price of vase at Christie's, 70 not 27 and January not November.]

Beautiful porcelain insanity. Reminds me of my aunt painting landscapes on eggshells. Less risk of death with that one though.

PS. LookBusy is me, Jo A. I don't know what happened there.

Stunning work! And your intro about gap analysis sounds remarkably like the discussions of a current project I'm involved with... and I want to scream...

@Linda - I think it happens all the time and everywhere. The next steps won't usually include implementing the changes, but nor will they include any learning.

They have a number of Sèvres porcelain pieces in the Wallace collection. The tour guide pointed out that even when the technology for proper porcelain transferred to Europe Sèvres porcelain was still demanded by the big-wigs due to its prestige and price.

@Limerick, yes, they have lots there. It looks much better when you know how it was made, doesn't it? They started using hard-paste as soon as it was available but I think the deal is that not all of those amazing colours are possible with the hard-paste technique, so they carried on with both. After the next change of management they mostly stuck to hard-paste, and dialled it down a little bit with the gold and the painting. There's still a factory at factory at Sevres - difficult to Google unless you switch languages. Apparently they use several formulae, including a 'soft-paste' but that seems to be a phosphatic porcelain with kaolin and bone ash, a much better solution technically although still pretty challenging.

Great to know the history behind those lovely pieces. A beatiful and magnificent collection the one at the Wallace (a jewell of a museum in my opinion).
Thank you.

In the diplomatic world, gap analysis is what you propose what you don't want to change anything, but someone else does, and so the compromise is to appear to be doing something that might lead to change while not in fact having the slightest intention of changing anything at all.

Well, they do spend obscene amounts of money (about $8 million), but on such meaningful objects as a shark suspended in formaldehyde...
http://www.nytimes.com/2006/10/01/arts/design/01voge.html

@Tango en el Cielo - there's that version too, of course ;)
@Johanna - but at least it didn't cost Damien Hirst more than that to preserve the shark. And presumably somebody wanted a shark in formaldehyde, or whatever it represents.

... what I mean is - at worst, a shark in formaldehyde for huge amounts of money represents a transfer of lots of money from a fool with money to a clever man likely to spend it more wisely, which can be seen as a good thing. It isn't in itself a gross misallocation of useful resources.

To make something intricately and commitedly beautiful (however you choose to define that) is a wonderfully existential act. What we value is not so much the object as the act - the will, the free choice, the lived moment - which it embodies. It's wonderful that traces of this survive over centuries to remind us of these, the deepest of human values, and that nothing that's truly worth doing in life is worth doing for money alone.

Thank you for this thought-provoking post. The generosity with which you share your thoughts and experiences with us is a similarly valuable gift. It seems to me that you do it because you want to do it - the best reason of all, as far as I'm concerned.

@silverofice - thankyou - and a thought-provoking comment. There's probably no way of knowing what the artisans who made these things wanted, or what they might have chosen to do under other conditions, although we can compare the quite different products being produced a very short distance away in England at the time - advanced high-quality wares that large numbers of people desired and could afford, but completely different from this.

"Because she wanted to" is probably a good characterisation of Madame de Pompadour's involvement as a financial backer and important artistic influence. And, no doubt, also that of the King. But wanting to is not enough; you also have to have whatever resources are needed. In this case, access to the state income and assets without any relevant constraint on priorities was obviously a necessary part. It did have violent consequences in the end, but not for another generation.

Your point is well made; that's why it's a such a good thing if people don't need to spend all of their time and energy earning an adequate living. They can devote their talents to far more interesting things.

Hi msh,I went to a small local auction, in Cork, today to view a Serves ormolu.But it was in bad condition; man.city blue in colour;missing huge amounts of gold painting;it even had a major crack across it's rim;not good treasure hunting at all..when I visit the Van Gogh exhibition in the Royal Academy I'll visit the Wallace museum to see the real thing...