Here's a quick computer-use tutorial for some of my mates. If you already know how to use iTunes Smart Playlists and why you might want to, and you already have an opinion about Di Sarli with Rufino versus Di Sarli with Duran, you can probably skip this post.

The task: A friend was annoyed, some weeks ago, when somebody played a mixed tanda of Di Sarli with Rufino and Di Sarli with Durán. I hadn't noticed, but it makes him feel jarred, as though he had to stop, change all his settings, and screw his head back on again. I asked why, and he explained that it's not so much about the singer sounding different, although they do, it's that they worked with Di Sarli's orchestra at different times and there's a big difference of style. So although he likes both, he doesn't like getting up for a tanda of one and then finding himself dancing with the other half way through.

To find out whether I agreed with him or not, I had to listen to a string of Di Sarli/Rufino and a string of Di Sarli/Duran and think about the difference. A good time to do the listening is on my commute, but I don't want to be fiddling with my ipod all the way, peering at the tiny screen, so I want a playlist of each, as long as I have available.

The solution: This is obviously a job for the computer. Finding all the tracks I own with a specific combination of orchestra and singer is the kind of thing they can do quicker than us. iTunes is in many ways annoying, but the easy-to-miss 'smart playlist' feature does this job quite well.


Go up to the top menu and go File --> New Smart Playlist, or on Windows you can do Ctrl+Alt+N. Now this appears, and I put a singer's name in it:

I'm telling iTunes to find me everything with the words "Roberto Rufino" anywhere in the Artist box. The playlist should be of unlimited length - I want to hear everything - and "Live updating" means I want it to update automatically whenever I add more of this artist's music to the collection. (All I have to do is read the album track lists carefully - sometimes they identify the singer for each track somewhere at the bottom in small print - and make sure I put the names in the boxes. "Album Artist" is for whatever it says on the cover - in "Artist" I just identify the artists for that track).

If a singer appears in my collection with more than one orchestra, I could, if I wanted, add another rule by clicking the + sign to the right. So in the smart playlist below, I'm saying I only want Podestá with Di Sarli, and not, for example, Podestá with Pedro Laurenz.

The + is also very handy if you've used more than one spelling of a name, say you've sometimes written "R. Rufino" because that's what it said on the CD insert. I tend to write exactly what it says, and not assume that two non-identical forms of a name are the same person without good evidence like seeing both forms on the same CD, in which case I write the full version throughout. That way I don't lose information, and I don't risk accidentally generating false information through my own ignorance. There's no real need to standardise, as it's so easy to use multiple forms in a smart playlist and have the computer search for all of them.

You can name the playlists and arrange them in folders. 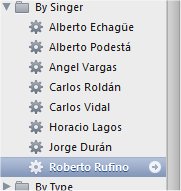 I have playlists for milongas and valses (I use the 'grouping' field) and for various combinations of values in "Artist", which gives me playlists by orchestra and by singer.

So, what was the answer?

There really is a big difference of style, which was obvious once I separated them out and listened to them in bulk on the way to work. The ones with Rufino are warmer, darker and more flowing. They seem sort of earthier to me. Di Sarli / Durán I can only describe as stately and glamorous, but with less forward drive. And with heavily-signalled, squishy endings. They make me think a bit of a Hollywood set for an early-colour musical. Durán's voice is more towards a trumpet sound than a clarinet, and the arrangements are quite different. I know that all sounds like wine talk, or like people saying Pugliese is purple, so if you want to figure it out you'll probably have to listen and come up with a description yourself.

My friend's dance is very expressive of those kinds of variations, especially the differences in drive and flow and swooshiness, and although he would probably be equally happy dancing to either Rufino or Durán, I can see why the change in dynamics would really wind him up in the middle of a tanda.

If I add "Year" to the columns displayed then I find that the ones with Durán are later, so this seems to be a change in Di Sarli's style over time. The ones with Podestá sound sort of in-between in style, so is this also true of the years, I wonder? Mostly, it seems so.

Just a remark on the note of incorrect information.

Tango cds are quite frequently inconsistent and outright incorrectly labeled, so I recommend having a look at the tango.info database which has figured out many corrected track listings and has a more consistent format, see e.g.