I was in a café where they hand out those buzzing things that tell you when your order is ready, so you can come to the counter and collect it. All they do is buzz and flash little red LED lights to attract your attention, then keep buzzing till you hand them back in exchange for your meal.

A young man was chatting with his friend when the thing buzzed. Startled, he jumped up, at the same time seizing the buzzer, staring at it intently and tapping its insensible plastic face, as though half his brain knew it was time to fetch the food and the other half thought an acknowledgement would materialise it in front of him. Or at any rate, knew how to react to a rectangular hand-sized buzzing thing that wanted its attention.

Both of them fell about laughing and he entered into the joke by waving it about and lifting it to his ear.

I regularly try to wave my Oyster* card at my front door; at least half the doors and gates in my life open when you wave things at them, and it is an effort to remember that this one requires a physical key.

There is a worrying kind of glass revolving door, such that you have to wave your card at it to unlock it, then step into a little 45-degree pocket, whereupon it starts revolving, and you shuffle very slowly around to be spat out at the other side. On no account must you push anything, since if you do it will panic, freeze, and trap you like a fish in a tank, so the security guard will have to come and press buttons to let you out.

There are two variations of a subtly different kind of revolving door that does exactly the same thing, except that it starts revolving when you get close enough (there's no indication of where you have to stand, or what is going to happen). One of those has a green button nearby that looks as though it might be a "request to exit" button; if you press it, the door gets stroppy and freezes, much to the annoyance of the people outside trying to get in. There are also some old-fashioned revolving doors that you just push; so that you stand there like a lemon trying to guess what you're meant to do.

And almost all these doors behave differently depending on whether you are going out or coming in. There are many doors where you have to do something to unlock them, and then do something else to open them, such as push or pull, with all the possible confusion that entails - but not too quickly, and not too slowly. Different doors I meet in the course of my day's work require staff cards issued by two different companies, both of which I am supposed to wear in a visible way (unless I am crossing the road between buildings, in which case I am advised to conceal them). But you cannot keep these two cards in the same container, because then they stop working. Neither can you keep any of them with your Oyster card, or that will stop working, too.

I am always standing in front of doors and hunting around for the "Open, Sesame" buttons that mean "unlock, I want to get out". They all look different from each other, and they're never in the same place twice.

It's a DOOR. You're not supposed to have to read the instructions.

The world is so confusing. No wonder it makes us nervous and inexplicably vexed.

* For non-Londoners, the Oyster card is the electronic ticket card that pays for bus journeys and opens barriers on the Tube.

Posted by msHedgehog at 17:22 0 comments

Labels: observations, other dance or dance in general

A tango that recently got stuck in my head for twenty-four hours - Ventarrón, Orquesta Típica Victor. I would have posted a performance but I couldn't find one I liked.


I actually rang up a friend in another country in order to hum it to her: and just like me, she and the other tanguera sitting with her knew it perfectly well but couldn't think what it was called. The words are here; only the first two stanzas are actually sung, but the whole (as far as I can guess) appears to be about an aged warrior of the streets, his fame once, his loneliness and infirmity now.

I didn't know the words, which is why I couldn't remember what it was called. But one of the reasons it got stuck in my head was that this wonderfully rhythmic, fighting and plangent tune reminds me very strongly of the final scene of the first act of Tosca - specifically from where Scarpia (the villain, chief of police) comes into the church to the point where, after soliloquising of sex and violence (he's planning both, but sex is the current priority) with his back to the pious crowd, he joins, with magnificent baritone hypocrisy, in the Te Deum. That whole bit would be too long, but there are lots of versions on YouTube that just do the last bit of it, from "Tre sbirri, una carozza". This one is good and doesn't suffer from anything particularly bizarre in the sets or costumes. Scarpia's makeup is explained by this being a stage production - inevitably strange on screen.

There's a Lego Tosca on YouTube. If you look.

Posted by msHedgehog at 21:36 0 comments

This one took a while.

Pineapple Studios is a building in Covent Garden, London, with several floors of dance studios, changing rooms and a café. The deal is that you pay a daily entry fee to the studios, and then pay the teachers whatever they charge for whatever particular classes you take. (You can join Pineapple, and not pay the entry fee, which works out cheaper if you visit more than once a week).

At the desk, they have A4 leaflets, folded twice, printed all over in very small print with the full weekly timetable, classified into levels along the lines of "Beginner", "Elementary", "Intermediate", "General", "Advanced" and "Professional", with mixtures and variations.

I picked up the leaflet recently, and on the Tube home, I started to count the different kinds of classes, got rather interested, and thought I would make you a chart.

To create the charts below, I typed out the name of each of the 266 classes offered in the timetable, and made a fairly vague, best-guess classification, first by looking at the words in their names and then by manually classifying the ones that didn't work for. I've totally ignored Pineapple's own classification on their website.

By "World" I mean anything characterised by a specific place of origin. Those dances have nothing else in common. This includes Brazilian Samba, Irish Dance for Performance, Island (Polynesian) Rhythms, Flamenco, Salsa, Bhangra Grooves, Bollywood Dance London, Capoeira and Egyptian Dance. It would include Argentine Tango if there was any, but in this particular leaflet there isn't a class listed. So the "World" bar in the charts doesn't tell you very much. It could equally reasonably be seen as a lot of little tiny bars - all these dances appear once or twice each.

"Street" is a very, very vague classification including Break Dance, Popping, Locking, Waacking, and a few things I'm not too sure about such as "New Skool". There are also two or three wild guesses in there.

You could dispute lots of things and do the classification lots of different ways. It depends what you're trying to do. Here, the only thing I am trying to do is get a general impression of how many people every week want to take what sorts of dance class, to see if I could learn anything from that.

A lot of classes fall into more than one category, like "Commercial Jazz" and "Ballet-Based Body Conditioning". That means double-counting, and it raises the total count from 266 to 296. There was one class, Singing, that only happened once a month - this is classified under "Music/Stage" along with a couple of other classes apparently designed for people appearing in musicals. 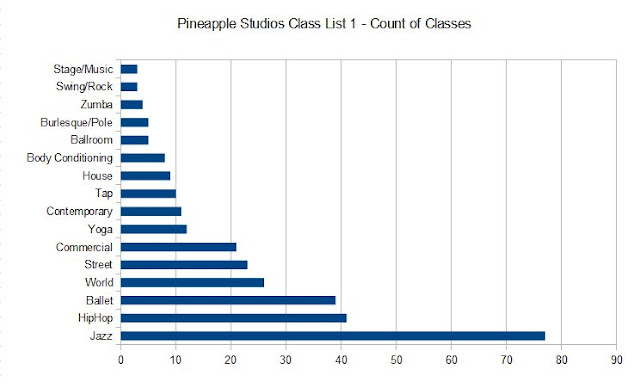 On a second pass, after a quick Google, it seemed to me that perhaps I should add together "Street" and "Hip-Hop", and perhaps also "House", as a broader classification of closely related (but living and rapidly evolving) styles. If you do that, something interesting happens; taken together, they almost catch up with "Jazz". If you added "Commercial" as well, they would comfortably overtake "Jazz". But I feel as though the reasons you would do "Commercial" are different from the reasons you would do "Street" or "Hip-Hop", even though they might be physically similar, or even danced to some of the same music. I could be completely wrong about that, though. 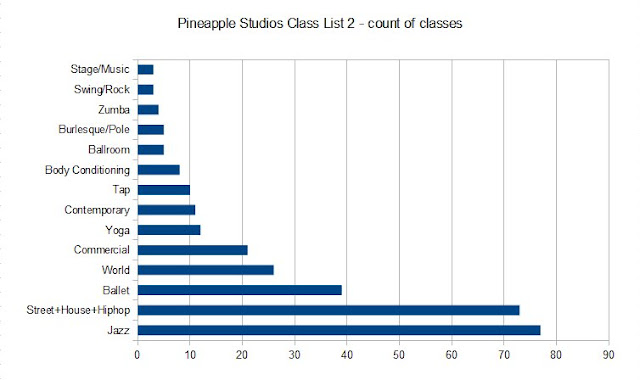 Another interesting thing: Ballet is very popular. In fact, that's what inspired me to do this. I noticed how often the word "Ballet" came up, and wondered why we don't see more of it in mainstream culture. Many, many adults and children participate in a ballet class every week. It's popular. How come it's so invisible to non-participants?

Carole tells me that a lot of adults who are mainly interested in other dance forms, do ballet for body conditioning, and also to plug themselves in to the traditional European language of dance; if you work as a dancer, it's extremely useful to know, and to have other people know that you know, what a plié is. Those things still make it very influential; it seems strange to me that it doesn't somehow come up more often as a thing that people are interested in and do. But maybe I'm wrong, and it does; I don't really watch TV.

266 classes a week, with say 10-20 people in each class, is a lot of participation. This is just one place, Pineapple Studios - albeit a rather unique place, right in London theatreland, with an extraordinarily long, easy-to-analyse class list.

But I suspect there are many, many adults all over the country who regularly dance for their own enjoyment, and not that many of them ever have any intention to perform, professionally or otherwise. Even at Pineapple, 80% of the people in my weekly samba class (about 19 out of 20 of us are usually women) probably have no such intention and are doing it purely for fun and fitness. Why, I was wondering, does dancing for its own sake not seem that mainstream, plus-or-minus Zumba? Why is dance not something that people talk about at the water cooler, much, the way they do about their Sunday-league football adventures? Strictly Come Dancing has done a certain amount to change this, but it's essentially a ballroom programme, with a mindset that sees dance mainly as a stage performance rather than a regular mainstream recreation. And only about five of the classes listed are partner dances at all.

It made me think. But I don't have any conclusions for you.

Posted by msHedgehog at 21:21 5 comments

Labels: observations, other dance or dance in general