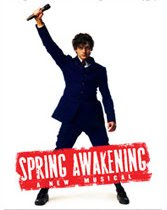 This poster for a musical has been catching my eye on the Tube. (Sorry the pic is so small, it's the only one I could find of this poster, but the poster looks better from a distance, anyway). I'm not really very interested in who this man-boy is or why he is holding a microphone, but I can't help saluting the genius who put him in knee breeches. It says the 1945 vintage look is over — and 1905 just doesn't do the job. This season, to look both radical and right, you have to go back to Trafalgar year*. I quite like the Enlightenment angle, and of course the hobbit hairstyle is just right.

Actually, it's not true at all. The shops are full of ghastly eighties tat. A pity. Although some of the drapey dresses are a little bit 1805, when I think about it. I tried one on today and it was all right, but hadn't been done with any conviction, and was just too boring from the back. Generally the high street was a rather unsuccessful mess.

Clothes are powerful works, full of meaning. This costume made me think of the Nelson and Napoleon exhibition which I saw at the British Maritme Museum in 2005. The two artefacts that stuck in my mind — both of a kind so rarely preserved — were Nelson's last-worn uniform, with bullet holes, and Napoleon's burnous. They were both rather small, slight men. The burnous — scarlet and magnificently worked, brilliantly displayed in a dark-lined, glass-fronted cupboard on a featureless figure, as though being worn — would have been a little short for me.

*1805, for my foreign readers and those who don't read Patrick O'Brian.

I am despairing over fashion these days. Shoes have been rubbish the last two years. I think the designers are taking the piss. Do they really think we have Barbie feet? Why do all the shoes look like trannie shoes?

And the clothes. The boiler/one piece didn't work in the '80s, why do they think it will work now? You can't go to the loo in those without getting completely undressed! And shoulder pads! We are not in Dallas!

There, I had a fashion rant.

It is an interesting poster.

Oh, I love seeing that poster on the tube. So smart. Perhaps you would like this site of ladies and gentlemans clothing?

Their retro models are delightful too.

I agree, the high street fashion or moreover, the lack of it has been rather frustrating lately.Sometimes I wish I had learnt how to sew.

While I was shopping for last night's new dress, I saw a lilac jersey sleeveless shift dress with shoulder pads. And I didn't get it, in any sense.