A postcard from León 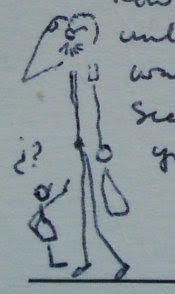 Several postcards arrived this week from Spain. My Dad sometimes adds his own illustrations. Here is one, and the relevant text reads: 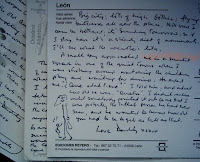 "A small boy approached me in a sunlit square in one of the quiet towns when I was strolling around watching the children play and waiting for dinner. He asked me, "¿Que edad tiene?" I told him, and asked how old he was. "Quatro". I didn't realise until somebody pointed it out to me that I was probably the tallest person he had ever seen, and he wanted to know how old you had to be to get as tall as that."

How lovely! Thank you for sharing the postcard. I can just see Chris peering down at this child and smiling that lovely smile of his. Better than a photo.

Your dad is a gem. I love that photo. It reminds me of Saint-Exupery's drawings in The Little Prince.

(is your dad very tall?)

He's 6'2" (186cm), and tall-looking, with long legs. So, nothing remarkable anywhere on the North Sea coast, but quite possibly the tallest person in the experience of a four-year-old child in a quiet Spanish village, or at least the tallest of those who understood the question. Some of the German or American pilgrims would be that tall, but it would be unusual for the Spanish or French.